Happy to be Morally Selfish

Physics Dictates that Life is Selfish and Must be Selfish - How it began, and finding a happy and moral solution 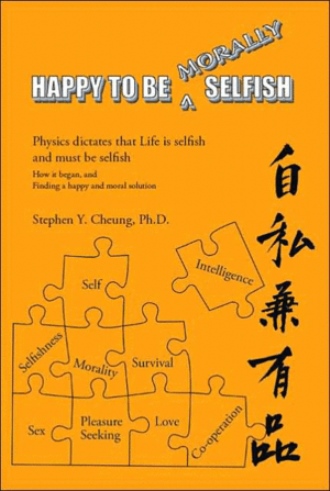 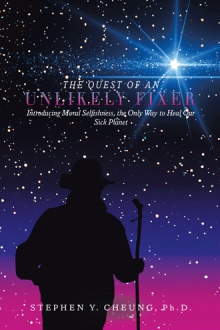 The book is all about selfishness. Selfishness leads to fighting. Every creature fights - we are no exception. Fighting is a vital part of survival; it handsomely rewards the winners. In humans, however, the invention of nuclear bombs has changed that. Instead of bringing all kinds of goodies to the winners, war will destroy us all. We must stop future wars. But how? This book provides an answer.

Part I of the book deals with the origin of our selfish nature. Physics dictates - the author argues - that all life forms are selfish, and need to be selfish. To understand how and when it began, the book traces selfishness back to the time when “life” first appeared on our planet. And how it intensifies as animals evolve. Part II of the book explores the evolution of modern humans from a chimp. Two major factors, the author believes, have helped humans to compete from day one. They were, and have been, intelligence and cooperation. Intelligence and cooperation were incompatible, like oil and water; the book proposes a theory on how early humans, despite their inherent selfishness, had willingly chosen to cooperate, and even to love. Together, intelligence and cooperation have eventually made us masters of all creatures. Part III of the book provides a solution to our selfish nature. Built upon the Golden Rule, the book offers a bold new moral model, which is applicable to all religions and cultures. It makes telling moral right and wrong very simple and unbiased; the book thoroughly discusses the morality of same-sex marriage, abortion, cloning, stem cell research, the current Iraq war, and many more issues. It ends by providing us a way to live harmoniously and happily within selfishness and morality; the book gives us hope. The book caters to all levels of intellectual sophistication. It gives a deep understanding of life, and provides clear and simple definitions to many fundamental, but amorphous concepts, such as self, and intelligence; the book amalgamates selfishness, intelligence, and pleasure seeking into a coherent theme of survival. It is original, fresh, and very entertaining.

Typically, writers of these sorts of books -moral issues, in particular - will either be brilliant and gutsy professors of famous universities - Bertrand Russell immediately came to mind; highly respected religious people such as Billy Graham; household names such as Oprah, Dr. Phil, or a guy called Tony a famous motivator who has bright shinny eyes, a billion dollar smile, and who makes walking on fire a piece of cake (the guy is almost anti-science). The author, yours truly, is none of the above - not even remotely close to any of the above. The author is a real estate salesperson. Though he has a Ph.D. in science, has spent several years doing research, and taught general biology once in a university, he has never made it to assistant professorship, which is an entry level to an academic career. After failing to get a permanent job relating to his specialty, the author first became a retail florist. The career lasted ten years. After that, he morphed into a real estate sales position. He is still doing it after 20 years. He really should have no business writing this book. With the introduction, your first thought could be, This guy must be crazy! Well, he is certainly an odd ball, as some of his friends have consistently described him. But crazy he is not. Please also be warned that a mental person, like an intoxicated man, often invariably denies being such.

Considering the territories the book covers, the reader has a good reason to think that the author is way out of his mind. If the reader is old enough, he should know that very odd things do happen from time to time.