Power at Your Fingertips

A Workbook to help you as a Consumer, Citizen, or Client, solving problems with private parties, businesses, creditors or governmental agencies by communicating with them more professionally, assertively and effectively 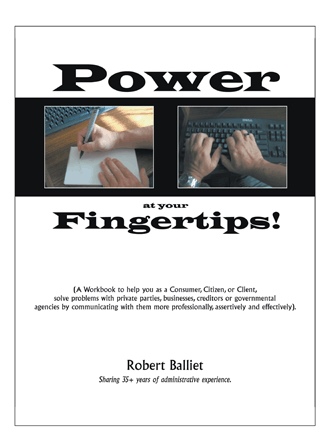 This Workbook’s purpose is to help you as a Consumer, or Citizen, or Client to exercise the Power At Your Fingertips more effectively: Help solve problems with private individuals, businesses, creditors or government agencies – to help influence their decisions, resulting in benefits for yourself, friends, or your community, by communicating with them effectively. This workbook contains many sample letters that you can use to assist you in resolving many different problems and situations that you may encounter. Let’s say, you’re having problems with your Insurance Company, a creditor, or a government agency and you want to know how to communicate with them effectively – draw their attention – that ultimately may result in a favorable decision: use this book with its sample letters to accomplish that.

• Author biographical note - Robert (Bob) Christopher Balliet was born in and raised near the German provincial capital of Bamberg, in the State of Bavaria. He immigrated to the United States with his family on December 16, 1962, at age 16 - not yet speaking English - to Elk Grove, California, where he attended Elk Grove High School and graduated in February, 1965. On January 15, 1969, he became an American Citizen. After serving honorably with the US Army in an administrative and Human Resources capacity, for eight years, in countries like Germany, South Korea and Vietnam – where he served with distinction - he returned to civilian life in the ElkGrove/Sacramento, California area, attended American River College, receiving an Associate of Arts Decree, and then California State University, majoring in and receiving a Batchelor’s Degree in Political Science. He worked for AT&T/SBC/Pacific Bell as a Staff Associate, Office Manager, Hiring Manager, and provided administrative clerical support in the Human Resources Department respectively, before retiring on December 29, 2001. Bob has a Son, Francis James married to Carolyn Renee; and a Daughter, Elizabeth Seton, married to Norberto (Bob). Elizabeth and Norberto are the proud parents – and Bob is the extremely proud Grandpa - of his two grand children: Izaak Christopher and Syler Macie. Over the years, Bob has helped many of his acquaintances and friends, and strangers, when they required or asked for help in dealing with Creditors, Contractors, Government Bureaucrats as well as other entities – hence, the result is this book!