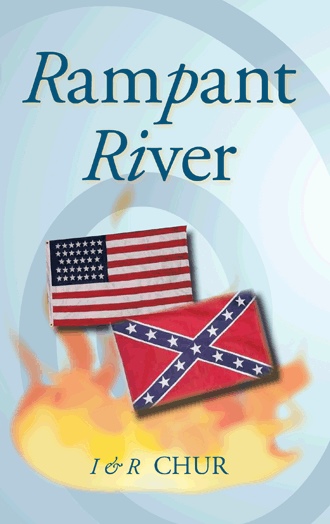 Pounding hoofs kicked up big clods of prairie sod; the black stallion plodded to the top of the knoll. Sam Morgan tightened the reins. The horse was a prize from a bandit he gut-shot, four years back when riding shotgun for the Jim Birch stage line. The horse snorted and pranced in a tight circle. “Smell the water?” Hearing the gruff voice, the horse whickered. Sam Morgan stroked the sweat damp neck of the big black.

The big man shifted his weight to ease his weary back and shoulders. He grinned at the sight of the silver-blue river and lush green meadow grass. A thin trail of smoke curled from a cabin hidden down river behind a thick stand of cottonwoods. The trail he followed Zebulon Pike pioneered in 1812. North was his destination, Fort Pike. He had a slim change to reach the fort and beat the sunset. Best to pitch camp along the river, he decided.

Beyond the river the rolling prairie dunes rose gently. Rampant River, swollen by the snow melt, cut a wicked swath across the plains of the Kansas Territory. Sam figured he traveled far enough south to cross Kansas land once claimed by Texas. He looked along his back trail; piercing black hawk eyes scanned the vast plains. Slate gray clouds cut across the horizon. Slouched in the saddle, Sam Morgan watched and waited. Satisfied no danger threatened from behind, he looked again at Rampant River and grinned.

The horse whinnied and strained muscles. Sam flicked the reins. He gave the sleek black horse an encouraging pat. Guiding the animal down the gentle slope of the knoll, the long, hard ride across the plains was lost to his memory.

At the river, Sam swung from the saddle and buried his face deep in the cool rushing water. The horse drank beside him. Once Sam’s thirst was satisfied, he laughed loudly and sprawled on the soft river grass. This could be home, he thought. Rich dark soil for planting crops of corn and wheat. It was time for him to settle down, live his final years in peace.

He scratched the gray stubble on his chin. His face bore the scars of smallpox. Smallpox killed his wife with child and his daughter long ago on the Mississippi valley frontier. Ten years of hard work and happiness ended. Sam left his farm, drifted to Texas and fought the war against Santa Anna. When the war ended in 1848, he chased Indians across the badlands with the Texas Rangers for three years. He figured to die. He went through hellfire, never a scratch.

He rode shotgun for the stage across Arizona Territory. He herded cattle from Fort Worth to Saint Louis. He explored the Rockies, trapping mink and beaver and fox. Summer past, he panned gold from the Feather River in California. He patted the pouch of gold dust sewed into his thick mackinaw. Sam figured he could settle some land and start a small herd of cattle with the money he’d saved. Time to settle down. He was too old to continue drifting from town to town and job to job. The wind was growing stronger, the sound rustling through the grass. Bright yellow sunflowers bowed under the force. An orange butterfly glided around a servis berry bush. Sam reached for a purple berry.

Perhaps the contentment of well-being relaxed Sam Morgan’s inborn reflexes against danger. In the corner of his eye Sam caught the glint of sunlight on brass. He looked over his shoulder, shaded his eyes with his hand. A man stepped from behind a tree, twenty feet away, rifle aimed. Sam’s hand came down like a salute and closed over the grip of his gun. His torso twisted. The rifle cracked. Instinct fought the agony of pain. “Back-shooter,” Sam cursed. His hand jerked the Patterson free of his holster. His fist held cold steel under his coat. The gun rested on his chest. He felt a numbness spreading through his body. The blue sky clouded over in dark patches.

Through the shroud of blackness, Sam saw the man methodically reload his rifle and check the spark. He didn’t need a second shot. The prairie wolves would gnaw bones before sundown, Sam thought. The man walked toward him and stopped, rifle barrel pointing at Sam’s chest. Sam admired the polished stock, a Kentucky Long Rifle. Before his mind went blank, he remembered firing the Patterson.

The tall, slim girl hunched over the black pot heard the rifle shot. She was fixing a stew for dinner: chopping potatoes and carrots, and cutting thin slices of venison. She paid no attention to the sound. The second shot made her frown; she knew that wasn’t Allen’s rifle. She kept busy with her morning ritual: hauling water and firewood, clearing the breakfast table of plates, spoons, and knives. One mug still steamed with pine tea.

An hour passed and Allen didn’t return. Andrea went to the door of the cabin. Down along the river a scattering of buzzards hovered in the sky. Allen shot himself, she thought. She caught the half-wild mustang in the small corral next to the cabin and swung up on the animal’s back. The spirited mustang broke into a fast trot. Andrea urged him toward the river and the circling buzzards.

She saw Sam Morgan’s sleek black horse first. The saddle on the horse meant it wasn’t an Indian’s horse. She swung down from her mustang and saw her husband, Allen, crumbled on the ground; his eyes stared at the river. Sightless eyes. She knew he was dead. Andrea’s mouth twisted at the sight; shefelt no great emotion. Her breasts throbbed with pain from the beating last night. She was glad he was dead. God forgive her! She made the sign of the cross.

A moaning sound startled Andrea. She moved cautiously toward the source of the moan. Panic seized her for an instant when she saw Sam Morgan’s body in the tall grass. Forcing a control, she bent down close to the big man. The buffalo grass, crushed and crisscrossed, was crusted with blood. His shirt was soaked with blood. The bullet had gone through his collarbone and lodged above his heart.

He’s alive, Andrea thought. But he won’t be for long if I don’t help. It took all her strength to get him to his feet and onto the mustang’s back. Supporting him, she led the mustang up the meadow slope toward her cabin. The black stallion followed.

Sam screamed once when Andrea lowered him to the ground at the front of the cabin door. He locked his jaw, looked at her with a sick grin, and bore the pain without another sound. She half-carried, half-dragged him inside the cabin. He was unconscious by the time she got him on her bed. Steeling herself, Andrea pulled open the bloody shirt. Blood oozed from the hole below his neck. She dipped a cloth in water and washed away the blood. She could see a jagged splinter from the collarbone. “I’ve got to cut the bullet out or he’ll bleed to death,” she said aloud. “Before God, I’ve got to try.”

She pressed the cloth tightly against the wound to slow the bleeding. Then, she poured boiling water from a kettle on the fire and added a portion of Allen’s whiskey. Allen’s thin skinning knife was on the fireplace shelf. Sweat moistened her brow. She hesitated. Tensing, she probed with the knife, never even pausing to wipe the sweat falling from her brow, she worked like a woman possessed. This man’s life or death depended on her strong will and the help of God.

Andrea felt the chunk of lead under the knifepoint. With her free hand she pressed hard on the flesh below the wound. She took a deep breath and stabbed below the lead and lifted. The bullet was free and the ugly black lead came out, dragging a bloody clot of burnt cloth. She poured the hot whiskey water into the wound. Tearing a blue cotton dress, she cut the cloth to bandage the wound.

Pioneering the Minnesota Wilderness, smallpox killed his wife and child. Haunted by the tragedy, Sam Morgan lives a violent and lonely life. After ten weary, aimless years of drifting he sought peace in Kansas, to live his final years. He found Andrea, young and passionate. He found a new beginning, a challenge to tame the wild prairie. Sam fights rustlers and survives blizzard and drought. A new friend, Ben Duran, partners with Sam and sells Rampant River, horses and cattle. The ranch thrives from Sam's labor and Ben's shrewd business deals. Andrea gives birth to a son. Mathew. A Negro slave and his woman seek refuge; Sam takes them in. The old rogue is enamored by Crystal Rouge, a saloon hussy. And, he seduces Sarah Johnson, a debutant form the East. It was Sam Morgan's nature to take what he wanted. The fact that Andrew Tilman, an ambitious suitor, loved Sarah made no difference to Sam. The slave issue is hotly debated by Kansans. When words failed, guns blazed. The land became a bleeding, restless battleground of singular skirmishes between Abolitionist and Pro Slaver. Disasters like Lawrence and Pottawatomie Creeks added fuel to the flames of war. Small fired kindled and rekindles, flared brighter and brighter. Armies march to battle. Sam Morgan fought a private war, guarding Rampant River ranch. Astride a black stallion, a Henry rifle crooked in his arm, he was a grim man ready to kill. The white crosses on the hill near the ranch house testified to Sam Morgan's contribution to the war and his loss. Sam Morgan is shot by Lily, a saloon girl, when he discovers her in bed with his stepson, Daniel. Daniel leaves Rampant River and joins renegades lead by the religious zealot Zachary Eaton. Sam's stepdaughter, Heather, falls in love with Lieutenant Courtney. The lieutenant dies in Captain Quintrill's raid on Lawrence. Heather runs off to New York and begins the life of courtesan. Trouble follows Sam after the war ends. Sam Morgan is beset by treachery, betrayal, and murder. Andrew Tilman, made wealthy by his railroad business during the war, seeks to destroy Sam financially. When his plan fails, he pays for Sam's murder. In the alley behind a Fort Pike saloon, the knife of a savage half-breed stabs Sam Morgan. Only revenge will allow Sam Morgan to rest in Peace.

To write a best seller is every writer's dream. During my teen years, I remember hearing the tic-tack-tic of the old Remington typewriter keys from my dad's study. Pecking vigorously with two fingers, my dad wrote 25 adult novels with back stabbing protagonists and bedroom passion. My dad died before completing a Civil War novel - Rampant River. I teach American Literature at Bell High School in Southern California. During summer breaks, I spent time revising my dad's western. I carefully researched the time-line (1857-1869) and added historical detail. I matched words with my dad, intensifying the reality of scenes and dialogue. Vacationing with my wife, we visited Lawrence, Kansas, where troops lead by Captain William C. Quantrill murdered 140 non-combatants on August 21, 1863. We crossed the vast prairie and explored western ghost towns. In my imagination I rode the trail with the main character in Rampant River, the tough rancher, Sam Morgan. 600,000 American soldiers perished in the Civil War. Rampant River is about the American spirit - honor and courage. God Bless America.