From War to Peace From Violence to Wholeness 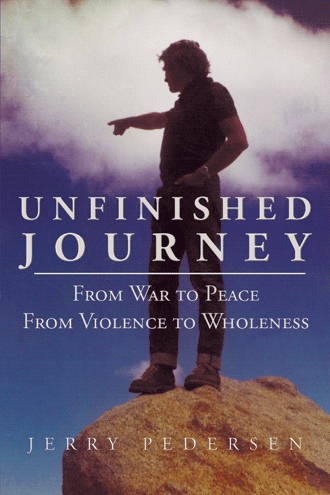 A true story of one man’s Unfinished Journey of peacemaking begins immediately after the author’s high school graduation in l943 upon joining the Marine Corps, serving overseas in the Pacific and aboard the Battleship USS Missouri as Honor Guard for the Sept. 2nd, 1945 Surrender Signing Ceremony in Tokyo Bay, Japan. There, as General Douglas MacArthur concluded the Japanese surrender and signed the Peace Document, he heard him challenge the world to “Pursue in Peace what we won in war”—a challenge Jerry personally accepted. Written 63 years later, he recalls the journey, from his reaction to the dropping of the Atomic Bomb on Hiroshima, and President Eisenhower’s warning regarding the rising influence of the military/industrial complex, President Kennedy’s “quest for peace” and the ‘Cuban Crisis’ and Vietnam, Martin Luther King’s pointed finger challenging him “to get involved”, his years in an East African University, and while at San Francisco State University in support of the longest student strike in U.S. history his being arrested, standing trial and confrontation with University President S.I. Hayakawa. Jerry—The Rev. Dr. Gerald O. Pedersen—chose being a Lutheran Pastor for his peacemaking journey. Seeking “peace with justice”, he Witnessed for Peace in Nicaragua, studied while in Cuba their efforts toward an alternative to the failed U.S. supported options for Latin America, researched during a sabbatical year at The London School of Economics in Britain the National Health Service as an alternative to our ‘Big Pharma and Big Insurance’ approach to health, and found models of ujamaa (community) in Africa for us to learn from in the U.S. After studying ‘communidades de base’ in Mexico and Ecuador, he experimented with developing similar ‘Small Base Communities in an Affluent Society’ in the United States. His journey led him to support Chavez’ nonviolent si se puede United Farm Workers’ union in efforts to bring both justice and peace for farm workers in California. As an advocate of the Way, he sought peace as being committed to justice in worldly affairs, but also the “inner” dimension of peace within the individual peacemaker as essential for the journey. While addressing and deploring the current ‘fundamentalism’ in all religions, including Christianity, Judaism, and Islam, he grounds his hopes for future peace in the ancient truths at the heart of all religions. He recognizes that for himself Jesus was the Liberator for his own gift of faith, and a supportive Christian Community has been important for enabling him to pursue and advocate for peace, but insists that all religions have at their center a deep commitment to ‘The Way’ of peace that he has experienced in his relationships with fellow followers in Judaism, Islam and Buddhism. He fervently believes that there will be no peace among nations until there is peace among religions. In the closing chapters Pedersen recalls the hopes upon entering the new millennia, the rude awakening of 9/11, the failure of ‘the war on terrorism’, disaster of ‘the war in Iraq’, and the false trust in a ‘Redemptive Violence’. He sees his journey and that of society, as one of breaking the habit of believing that violence can bring peace, resolve conflicts, and lead to wholeness. He witnesses the Unfinished Journey as one of discovering that love and Active Nonviolence is a realistic, practical and only lasting way to solve problems—even as violence and war are not realistic, practical or ever able to solve problems—whether for individuals, or for nations. He discusses the many dimensions of Peace and the multifaceted realities of violence, the needed rejection of our false faith in the myth of Redemptive Violence that underlies so much of American (and the world’s) culture and foreign policy, and takes hope in the recent discoveries and developments in Active Nonviolent peacemaking as social change movements that have demonstrated their ability to bring effective and positive societal change. His message 63 years after the end of WWII is a powerful affirmation for a renewal of hope with the simple but difficult message of this Unfinished Journey of peacemaking that: “There is no way to peace, peace is the Way.”

Onboard the USS Missouri off Japan August 6, 1945, 18 year-old PFC Jerry Pedersen listened as the loudspeaker announced an ‘Atomic bomb’ had just been dropped on Hiroshima instantly destroying a city of 200,000 people. The whole world changed that day, he sensed. Then September 2nd, as Honor Guard for the Japanese Surrender Signing he heard General MacArthur declare: “A new era is upon us. The utter destructiveness of war now blots out this alternative… We must go forward to secure in peace what we have won in war!” Those moments culminated in his calling—to be a ‘peacemaker’. Few can share a historical perspective so powerful, calling hearts and minds to wrestle with continuing justifications for war and the pursuit of peace. From East Africa University chaplain in newly independent Tanzania to San Francisco State University 1968 and his arrest during student protest, to growing a large conservative Orange County congregation with social justice workshops, to ‘Witness for Peace’ in Nicaragua, through today’s ‘war on terrorism’ – this is Dr. Pedersen’s inspiring journey, from war to peacemaking. Peacemaking as found at the center of the world’s great religions and 20th century ‘Active Nonviolence’ movements. It's our unfinished journey as we remain on a perilous precipice of permanent war looking for another way.

Rev. Dr. Gerald O. Pedersen is a retired pastor who served in campus ministries at University of East Africa, Portland State University, San Francisco State University, Stanford University (interim) and as Senior Pastor for a large Orange County congregation. He holds a doctorate in theology with post-doctoral work at London School of Economics.