Well, If You Don't Like It Here Why Don't 'Cha Leave

by Janet A. Garnett 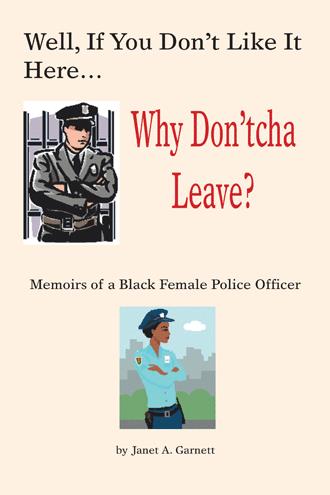 As the subject matter of this writing covers the experiences and, therefore, conclusions of an American born Black woman from the south in the 1960's through 2000's, the reader(s) should be braced for some very glaring, and no doubt, very disturbing facts covered in these experiences. One definitely should not be confounded by the author's conclusions. Being from the "Gateway to the South," better known as Kentucky, patriotic fervor as well as utter devotion to one's country is instilled in the marrow of our bones in that state. We who are African-American (as we are now known) have just as much loyalty to the land as any and all else. And just as it was then in the '60's through the '80's, so it still is in the '90's through the present, 2006, we still find those in power in our beloved land retaining the same unwillingness to welcome us into fully sharing in the democratic process, and enjoying the benefit of financial inclusion, as well. The preface of this book of memoirs includes one of several incidences while I was still in my single-digit years of age, among which were my Caucasian elementary school teachers not being happy with my love of books, and my desire to write one of my own while still in the 2nd grade. Some improvement was experienced when I went to 6th grade with my large and friendly platinum-haired teacher, Mrs. Handy. There was a national writing contest held by the American Legion in 1968 on, "What The American Flag Means To Me." The prize to be awarded was $25. I won the contest. The amount I was given was $17 instead of the $25. I was told the reason was because, as Mrs. Handy was so impressed with it, she decided to type it and send it in, rather than in my own handwriting,in which,according to the American Legion officials,it was supposed to be. OK. Then, I did a stint in the U.S. Army for a total of six years, having every intent of becoming a commissioned officer. Never being a "take 'No' for an answer-type, having been exposed to enough of how much I'd be welcome into the officer's ranks, I persevered through prayer and head-butting the doors until I became a 2nd Lieutenant in 1981 and became honorably discharged in 1984 at the rank of 1st Lieutenant. As the atmosphere in the United States under Pres. Reagan was such that the companies still run by the same bunch of bigots who didn't want to have to hire any of us beyond $4 an hour to begin with, now they didn't have to. And they weren't. No matter how many college degrees, and technical institute diplomas and other credentials we had...they just weren't taking us on. Thus, when on the bus in Louisville in 1987, I heard all these wonderful stories about Atlanta, and how you could get a good job in just a couple of weeks...I packed up and went...cold and with no contacts. But I'd had it with Louisville's reticence that it STILL retains to this day for us as far as employment, inclusion in the business community, fairness in police tactics and handling, etc. That was where I found employment for the next fourteen years of my life on one of Atlanta's police forces-the one with its rapid transit authority called, MARTA. And from Chapter One-on-this Black woman's work experience on the state-sanctioned, law enforcement and protective services of the citizenry at large is shared with the world.

Born and raised in Louisville, Kentucky in 1957, Janet Ann Garnett, the first born of three children to Mrs. Violet Garnett-Brewer, had an instant attraction to the written word while still in her single-digit years. She authored her own book, "Sonny the Little Duck," in the 2nd grade at Henry Clay Elementary School. She experienced the harsh realities of being a Black American in the early '60's, but fortunately, these were the years Dr. Martin Luther King, Malcolm X, and other dynamic leaders in our behalf exploded on the scene. Exposed to newer opportunities made more readily available to minorities, Ms. Garnett, having been inducted into the National Honor Society in 1974 while at Shawnee High School, was awarded a Basic Educational Opportunity Grant (B.E.O.G.) which had come into being during the Carter Administration. After obtaining an Associate of Arts Degree from Jefferson Community College in 1978, she joined the United States Army with the full intention of becoming a commissioned officer. She joined at the rank of PFC due to higher educational level, and after much perseverance and persistence, a two year R.O.T.C. scholarship for in-service personnel with at least two years of college came available, and in 1981 she obtained her commission. While attending the University of San Francisco she wrote her first screenplay, "Count Radesqu," c.1980. After serving out the rest of her years as a 2nd Lieutenant at Fort Lee, Virginia, then Fort Dix, New Jersey where she was promoted to 1st Lieutenant, she was honorably discharged in 1984. Finding the job market highly dismal as far as meaningful employment and forced to go back home to Louisville, she got sporadic work with a mortgage banking company through Manpower Temporary services, and Bally's Aladdin's Castle as, what her mother described, "nothing but a glorified bouncer!" As things became bleak as far as putting her skills to work, she became inspired to head for the "promised land of Atlanta, Georgia," where it was said to have plenty of "good" jobs there. In 1987 she relocated cold, with no contacts, only $280 to her name, and only faith in God to take care of her. In 1988 she was hired on to the MARTA (Metro Atlanta Rapid Transit Authority) Police force where she remained continuously employed with them fourteen years as a Post Certified peace officer. During that time she authored a coffee-table type book called, "CigCars,"c.1998 embodying her two great passions, cars and cigars, and comparing over 83 brands of handmade and machine made cigars to the same number of makes and models of automobiles. In 2002 she took advantage of the "Early Retirement" program that was being offered to aging officers (and who had topped out in pay) and now authors her third publication entitled, "Memoirs of a Black Female Police Officer," which was a subtitle of the popular catch phrase of unapologetic members of White society in retaliation against Black complaint of their treatment here in these United States... "Well, If You Don't Like It Here, Why Don't 'Cha Leave?" As seen, told and observed through the eyes and opinions of a seldom heard from voice, the author hopes and trusts this book will be of useful advice & insight for the betterment of an America for all its peoples.