Economics in a Nutshell

The Political Destruction of Free Enterprise 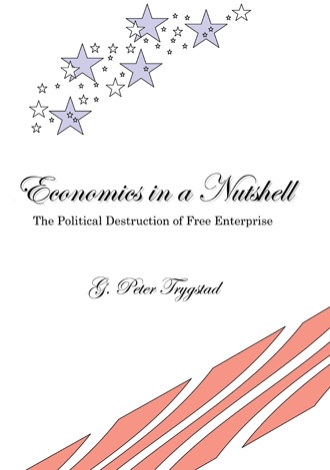 Economics in a Nutshell

In free enterprise the competition for sales will drive prices downward until all products are sold. Prices can fall no further.

In free enterprise the competition for employment will drive wages downward until all labor is hired. Wages can fall no further.

In free enterprise full employment is natural, the production of consumer goods is at its highest, and the buying power of wages is at its greatest.

Socialists seek to override the natural distribution of wealth in accordance with ability and effort and to redistribute wealth in accordance with need. The unintended consequence of employing force is the destruction of affluence. Greed overrides need when armed by law. The finest distribution system imaginable is lost. The gold standard is lost. Inflation begins. Unemployment begins. And the gulf between the haves and the have nots widens.

But shortages will drive them upward.

The labor union will whine that employers would pay squat if not for union coercion. That is decidedly false. A balance between wage rates and employment always exists.

A fully free market economy will create maximum affluence for its members and distribute the affluence to each in accordance with their ability. But the socialist creed demands from each in accordance with their ability. The socialist moron will force apart the marriage of ability with incentive and destroy the natural creation of wealth in a civil society.

The capable will always contribute the most to a free society. They may accumulate wealth over time, but they deliver to the public a product of far greater value in the present. That is why the capable are in economic demand.

Politically fixing prices above market will always result in surpluses. They won’t sell (like overpriced labor). Politically fixing prices below market will always result in shortages. They won’t be supplied. The intelligent society will allow the impersonal finesse of supply and demand to set wages for full employment and prices for market clearance.

Unarmed free enterprise will create a natural and bountiful economic balance without economic knowledge. But political force and ignorance will destroy it.

About Chapter 40 The Graduated Income Tax

Consider the economic effect of a marginal tax increase on the medical profession. The profession will shrink. A significant fall in the profession's net income will immediately initiate a decrease in the market supply of doctors. But as their ranks dwindle, consumer demand for those remaining in the profession rises.

Demand normally falls when prices rise, but not in the presence of a shortage. A sharp increase in the demand to supply ratio (patients to doctors) will initiate a natural rise in the gross income of doctors remaining. If the subsequent rise in net income offsets the initial drop in net income from the tax increase, then consumers have assumed the doctors’ marginal tax increase. And that is exactly what happens wherever there is inelastic market demand for a class of labor.

The fall in the ranks of the capable will cease when a new balance is reached. But the shortage in their ranks will remain as will their higher market costs as long as the graduated income tax remains. Wonderful!

This could not have been the intent of the economic zeroes in the Congress.

IRS figures for the year 2000 claimed that the top 10 percent of earners paid 67 percent of income taxes. But the figures are grossly misleading. The consumer is never counted as a taxpayer, and the apparent taxpayer is never seen as a tax collector.

We may presume that consumers easily pay two thirds of income tax revenue because of market demand for the services of the capable. But not all high income escapes this tax. Income set above market by law (organized labor, bailed out bankers, and others) rather than by supply and demand, is vulnerable. The graduated income tax will scarf up income seized under color of law. That is its only attribute.

Compare free enterprise to government. The gross sum of market set net incomes and government set marginal taxes makes ten percent of earners appear to be scalpers. But it is only the government that is doing the scalping and only the consumer who is being scalped.

A Portrait of Political Failure (from the back cover)

O what tangled webs we weave, when first we practice to deceive.

The Federal Reserve bashed the American economy in the year 2000 because investments in the private stock market were paying much more than investments in federal debt (bills, notes, and bonds) at maturity. Their colossal alibi was to slow an 'overheating' economy. But their real purpose was to bring down the stock market and avoid a default of the national debt.

Economies do not overheat. Progressive taxes on personal income are passed to consumers by changes they create in supply and demand. Social security taxes are not shared by employers (corporate costs are forwarded to the market). Labor unions gain buying power by pushing minimum wage labor down (the national wage is finite). And monopolies always require political support. This information, while absolutely true, is not government approved.

A natural economy is superbly controlled by supply and demand. But career seeking politicians create inflation, stagflation, wage gaps, recession, and depression in their gross economic ignorance and self centered pursuit of political careers.

The author explains the economic interactions between private enterprise and political force. The political solution is a return to Laissez Faire. But can politicians arrive at economic truths before economic disaster befalls the nation? The depression Congress could not. And the new Congress is their clone.

G. Peter Trygstad, PE, BSEE, is an electrical engineer licensed as a professional engineer in the State of Washington. He worked for the Naval Undersea Warfare Center, Division Keyport, for three decades participating in development of underwater weapon systems. His present interest is the economics of freedom and free enterprise.