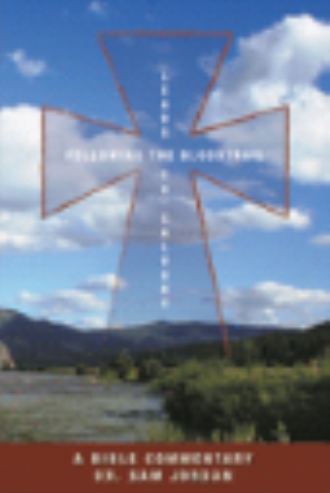 Beginning with the Biblical view of the dawn of mankind God had a pointed interest in protecting the blood trail, blood trail that leads to Jesus the Christ. The Old Testament depicts a picture of God choosing a people to focus His attention to bless and protect. God chose the nation of Israel. The history of the Nation of Israel has been a long story of disappointment to God.

Now we come to the main crux of the book, “The Blood Trail.” Redemption for man was and is the purpose of God protecting the “Blood Trail” from the beginning. Let me the preacher, explain: “The Blood Drawn from Immanuel’s Veins” placed in man’s laboratory would not have revealed the necessity for Jesus the Christ dying, but in God’s laboratory it revealed that it was absolutely required for the salvation of mankind.

Further explanation: (John 1: 13) “children born of natural descent, not of human decision or a husband’s will, but born of God” That is the reason for the Virgin Birth. God is the Father of Jesus the Christ.

Writing a commentary on the books of the Bible is a rewarding undertaking; it keeps me in the Word of God. My conversion to Jesus Christ started fifty years ago. I started out teaching Sunday school and graduated into a witnessing program. Reading the Word of God revealed to me that witnessing for Jesus Christ was what a child of God should do. The more I witnessed the more blessed I became, and I wanted to share my blessing with others, so we started a witnessing program to teach other Christians to get involved. We started a program by the name of “National Action Crusades” under the umbrella of the Assemblies of God in Springfield, Missouri. I met a man and his wife. Charles and Peggy Capps from England, Arkansas, and together we traveled throughout the United States holding seminars on witnessing. Over a period of fifty years my life has gone on to become pastor of three churches as well as building a Christian Center, “Life Unlimited Christian Center.” When I say my life has been blessed that is an understatement. Now that I am 84 years old I have resigned from pulpit ministry and moved on to writing books, one of which you are holding in your hand called “Following the Blood Trail Leads to Calvary. It is a commentary on all the books of the Bible. Writing books is one of God’s blessings to me. I have written three other publications, “From Religion to Rebellion to Relationship” a memoir; “Conversational Witnessing;” a witnessing training booklet, “Matthew 6: 33 Principle” a book used for training, and “Mysterious Envelope”, a novel. All available by writing / or calling me: Sam Jordan, 305 Coyote Ridge, Kerrville, Texas 78028 Phone: 830- 367-3317 Sam Jordan PhD.