How Awesome this Place

Genesis the Ongoing Story of Creation 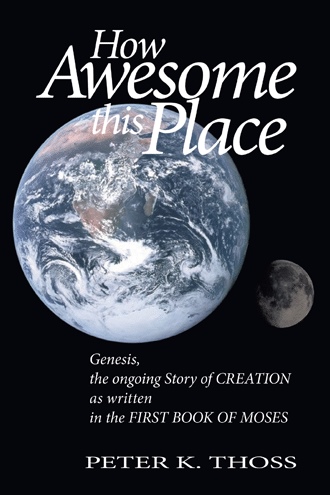 Creation and Evolution are sometimes controversial topics to modern Man. How can a modern person of Faith reconcile scientific knowledge with biblical accounts of Creation of Heaven and Earth? Why, where and how does Man fit into the overall scheme of things. What is the destiny of the Human Race? How can Man avoid trouble and have a successful Life? These are all age-old questions answered by an age-old Story, namely, the Story of Creation as recorded in the first book of Moses. The Writer has taken the humble step to explore this informative Story in a meaningful manner, so as to benefit Man and Woman in their unwittingly problematic Life. Life is complicated and too many self-proclaimed gurus offer Man and Woman their un-solicited advice , how to achieve Nirvana. This book is written to provide information on how to deal with problems and solutions according to divine Scripture. May the Reader be richly blessed by it’s contents. The Writer

Born in 1935 in Germany, he emigrated to Canada in 1957 and has resided in the Greater Vancouver area ever since. His Life was a turbulent one at best and his love for adventure not always to his advantage. On the positive side, Peter grew up in a loving Family with great Grandparents and extended family, during the war years in war torn Germany. Germany, as it was, was not a place without perils. The first bombing-raid on his hometown Plauen almost cost him his young life, but it appears, that God had other things in store for his sometimes turbulent future. At a revival-meeting in Plauen in 1950, Peter stepped forward to accept Christ. The following years, however did not always reflect the "Walk". In 1953, he fled the East for the West with an Eye to emigrate to Canada. Before leaving for Canada in 1957, Peter married Christel. This turned out to be his first unexpected Catastrophy in the new Country. By the end of 1958 , Christel was gone and he was heading for divorce. In 1961, he sponsored his parents, sister and brother for Canada. He re-married in 1962 and again divorced 10 years later. By now, there were 4 children , Jerry, Debbie, Rick and Steve. Being the ultimate optimist, another marriage followed in 1974. This marriage too terminated in divorce in 1997 , adding the last child, Jennifer. Peter married Eleanor the same Year, positively his final, faithful Spouse. While Peter attended several University- courses and the Pacific Institute, he does not hold any impressive decrees , other than Urban land-development diploma and Realtor and Developer licence. As Peter sees all his successes and failures as a result of mostly spiritual consequences, he has followed his spiritual urges to write this book , keeping in mind, to help others with their journey through life while at the same time granting the reader his or her own free choices. The Author