The Vrooms of the Foothills, Volume 1: Adventures of My Childhood 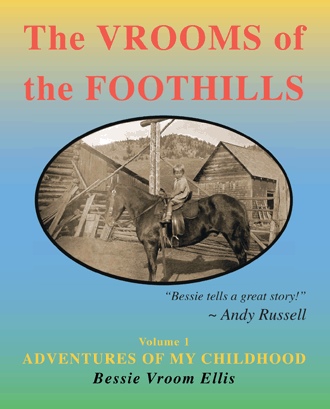 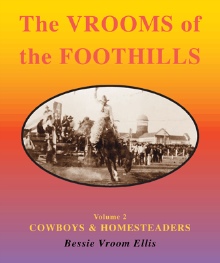 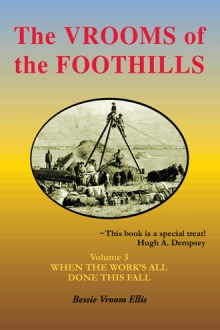 The Vrooms of the Foothills, Volume 3: When the Work’s All Done This Fall
Bessie Vroom Ellis
$10.50

In THE VROOMS OF THE FOOTHILLS: ADVENTURES OF MY CHILDHOOD, Bessie Vroom vividly recounts growing up on her family’s ranch in southwest Alberta. With the towering Rocky Mountains as a backdrop, her stories are full of the hardships and fun of ranch life in the 1920s and 1930s. Illustrated with 8 maps and over 110 photos.

Bessie Vroom Ellis published her first book,THE VROOMS OF THE FOOTHILLS Adventures of My Childhood in 2003. It is the story of her happy, adventurous childhood on her parents' ranch in the foothills of southwestern Alberta. Bessie attended one-room country schools for her elementary grades, riding on horseback for a round trip of nearly nine miles each day. She graduated from Pincher Creek High School and attended Calgary Normal School. Bessie taught in a country school near Drumheller, AB, and at Waterton Park School. In Waterton, she met and married a local resident, George Annand Jr. They raised a family of four children, Edith, Evelyn, David and James. During her more than 20 years in Waterton Park, Bessie wrote feature articles and the column "Wonderful Waterton" for The Lethbridge Herald. She also contributed news items to CJOC Radio and CJLH-TV in Lethbridge, and to The Calgary Herald, Calgary Albertan, and the Hungry Horse News of Columbia Falls, Montana. She was active in the Girl Guides of Canada and the Anglican Church. After 15 years at home, Bessie returned to her teaching career. She updated her qualifications, through night extension classes, Summer School and day classes. Bessie was awarded a Bachelor of Education degree by the University of Lethbridge and a Master of Education degree by University of Alberta. She then taught in Lethbridge. After her remarriage in 1975, Bessie moved to Regina, SK, and taught there for another 15 years, for a total of over 29 years of service in the teaching profession. At the University of Regina, she earned a post-graduate Diploma in Educational Administration. During her years in Regina, Bessie travelled extensively in Canada, Europe, Mexico, and the United States. She was active in politics, running for political office herself, and then working to promote the election of more women at the provincial and federal levels. In the early 1980s the Saskatchewan New Democratic Women (SNDW) established a fund, Bessie Ellis Fund, which assists women running for nomination. In 1992 Bessie was awarded the Commemorative Medal for the 125th Anniversary of the Confederation of Canada, 1867 - 1992, "in recognition of significant contribution to compatriots, community and to Canada." Upon retirement, Bessie returned to her writing. The author is currently writing a second book in the series entitled THE VROOMS OF THE FOOTHILLS: Pioneer Adventurers.