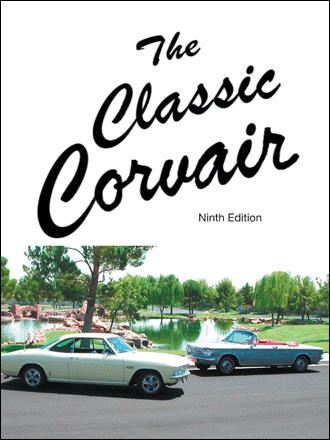 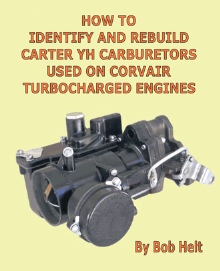 ABOUT THE AUTHOR Bob Helt has owned Corvairs ever since he bought his first one off the showroom floor in early 1960. He wanted to be one of the first in town to be driving a new Corvair, but was encouraged to wait until production increased and the prices asked by dealers stabilized. His 1960 Corvair was replaced in 1962 with a new Corvair convertible, a car that was his daily driver until the late 1970’s, at which time it was retired and restored. He still owns this car which is driven occasionally for shows and parades. In the early 1970’s the first of his five children started driving. After a few bumps and dings on his personal cars, it became obvious that each child needed their own car to “bang-up”. This resulted eventually in five Corvairs, plus his own Corvair, in daily usage. To complicate matters, his son raced another Corvair on weekends. So your author got his extensive Corvair knowledge by maintaining, upgrading and repairing all these Corvairs. A very intensive education. Every weekend and spare hour was spent working on his fleet of seven Corvairs. Bob is a Past President of the International Corvair Society, CORSA, and was on the Board of Directors for many years. He has been active in CORSA as Treasurer and Technical Advisor. He has published many articles on the Corvair, and now brings all of his knowledge and experiences to one place in this book, The Classic Corvair. If you want to know the secrets of the Corvair’s design, maintenance and upgrading, this is the book you need. The Corvair was Chevrolet’s economy car offering in 1960, but it soon was recognized for its true sporting qualities, and became known as “The Poor Man’s Porsche.” This was a real tribute to the car and its progenitor, Ed Cole, later President of General Motors. Inside you will find the complete Corvair technical story. There is information on the Corvair history, technical specifications, insights into the design and construction, maintenance secrets, Corvair Vendors and other sources of help. Problem areas, and upgrade suggestions are well covered too. There are chapters on engine rebuilding and other mechanical aspects. In short this book contains everything you want to know about your Corvair, its operation, and maintenance. This book is a MUST for anyone who owns or wants to own a Classic Corvair.