In the Aftermath of My Son's Murder 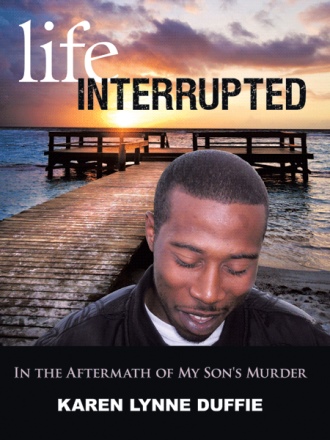 On June 11, 2007, at about 1:30am, I heard four words that changed my life from that very moment and forever: "HE DIDN'T MAKE IT.” I said to myself, “Did they mean my son is the “He”? In the utter confusion that has taken hold of me, I was trying to make sense of who is the “he” for about 3-5 seconds. I remember feeling the wrinkles around my eyes, raising my eyebrows, and holding my lips together tightly. Well, after all, I was in the emergency room to see about my son Kourtney after receiving a frantic call from my sister Kim. And then, BAM! It (the realization) hit me as if I were hit in the face with a hard snow ball...it stings...oh it hurt! My Kourtney didn't make it–meaning that: he is dead.... Yes, he is dead! My Kourtney, or “1st Born,” which was my nickname for him, entered this world on July 20, 1984, at 3:17 in the morning. Now, a few weeks shy of his 23rd birthday, he’s gone…. My knees started to buckle, I could feel my legs give away, my bones feel like rubber-bands, and I scream with all my strength “Noooooo!” Everyone in the emergency room was looking at me. “Since you say he's dead, I have to see him,” I said. They (a team of 2 doctors and 2 other staff) walk me down the hall…and there he is. One of his friends is leaning over him, crying. Jaz is there, but, I did not notice her immediately. I remember feeling protective over Kourtney since I did not recognize the guy standing so close to him. I stop at the room entrance, just to make sure it's him I guess. I know instantly. This is my son! It is 1st Born! "Oh my...Kourtney," I whisper. Slowly and deliberately, I approach his lifeless body, which was covered with the brightest and cleanest white sheet I had ever seen. It’s pulled up to his shoulders. “Okay, he does not look dead–just sleep,” I said to myself. There is broken glass in his hair, along with little traces of blood. I attempt to touch his curly hair, but the doctors tell me not to because it’s evidence. His eyelids are cracked, just enough to see the bottoms of his eyes…they are lifeless. Wow, this is my first time seeing eyes with no life. My head drops, and the floodgates of tears do, too. My initial thoughts (while staring at him and holding his hand through the sheet) were, "Who hates Kourtney? He has an enemy, huh?" I’m puzzled. But this still makes no sense. He was alive and full of life six or seven hours ago at Jazmyn’s birthday dinner at my mom's (Honey) house. Hours ago, he had asked me to cut him a slice of cake…he was okay then…he was laughing and talking and walking...HELL, HE WAS BREATHING! Now, he's not. Just like that, he's dead? Yes. All I've ever had to deal with were sick, older folk being dead. Tell me again. How’s it that he is dead because Kourtney can't die, can he? Death took on a whole new meaning in my life ever since that moment. Within minutes, friends and family showed up at the hospital, crowding the room to the point that hospital staff had to move us to a much larger space. I see my cousin Lacey saying a prayer of peace and laying hands on my dear son. He is getting colder and stiffer by the minute. I can feel it. And now his stomach and thigh are puffing up. He’s changing – going through what happens when dead people bodies are shutting down completely – forever. People are touching him and crying and screaming. I witness my mother falling out on the floor, my sister Kim throwing up. Jazmyn is standing on the opposite side of me. She says over and over “this some bullshit!” We hold each of his hands and rub his arms. We feel around his body, searching for the bullet hole that ended his young life; we can’t find it. He looks so clean and close to perfect. He is at peace. The hospital staff cleaned him up so well; there was no blood on him–just a smattering in his hair. This experience is powerful…overwhelming…surreal. I look around the room in a dazed dreamlike state, crying. It’s hard to see my face because I have a baseball cap pulled tightly over my head — yeah the one from the Hard Rock Cafe. While people are hugging me, I'm still stuck on "I just talked to him about a slice of cake.” I’m fixated on that point in time. Like most people faced with this type of tragedy, I need things to make sense of something that defied logic to me. But I guess it makes sense with respect to the plain fact that someone pointed a gun at my son, my beloved Kourtney, pulled the trigger nine times, with three of the nine bullets striking him. These life-ending projectiles hit his chest, penetrated his heart, and shut down his diaphragm. He could no longer breathe so, yes, the result was death. He died. My Kourtney died. We stay at the hospital about three or four hours before the Wayne County Medical Examiner’s van arrives to pick him up and to conduct that awful autopsy. I knew they were going to cut him up and sew him back together. I didn’t want them to take him. I’m very grateful that I was able to identify him at the hospital versus doing so at the morgue, where it would have been done by video! That’s so scary to think about the “What ifs?” under those circumstances. At the hospital, we could sit next to him, touch him, cry over him, and, above all, pray for him. As they take my son out of the room, I try to look. But, a lady is

I have learned a few lessons since Kourt’s death. One, death is not negotiable. Once someone has entered the realm of death, they totally cross over, they are gone. That lesson has been the most difficult for me to accept. For the first time, I was unable to help Kourtney with a problem. There was no phone call I could make – nothing I could do for him. I felt like I had failed him. I was not there to protect him.

On the morning of June 11, 2007, death took on a whole new meaning for Karen Lynne Duffie, a Michigan mother of three. That’s the morning her twenty-two-year-old son, Kourtney, was murdered. In this memoir, Duffie provides a personal look into her day-to-day struggles, thoughts, and activities after her first-born son's death.

Through journal entries, Duffie tells her emotional and heart-wrenching story of loss, grief, and recovery. A raw and captivating narrative, Life Interrupted reveals this mother’s innermost thoughts and feelings. By sharing this memoir, Duffie provides grief support to others facing the murder of a child. The story serves as a beacon of enlightenment, inspiration, and hope for the future.

Karen Lynne Duffie is the proud mother of two sons and a daughter and lives in Michigan. This is Duffie’s debut book. Contact: klduffie@yahoo.com subject line: BOOK Facebook: Karen Duffie