Mayhem at the Manor 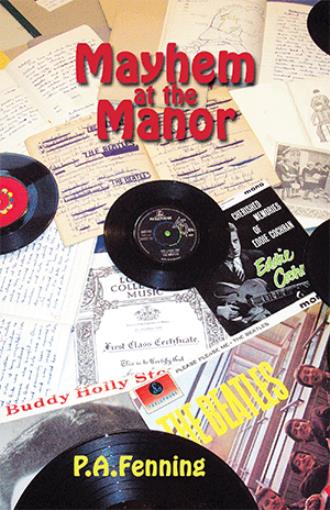 That afternoon a welcome light rain fell for a while cooling everything down. After tea boredom proved to be the mother of invention as Ray and Amy, having nothing better to do, decided to lay a row of crab apples across the road and then sit on the five bar gate and watch them get splattered by the passing motors. They stockpiled the apples at the roadside to replace the squashed ones. Dad appeared briefly and leaned on the gate. “You’d better leave a gap at either end so cyclists won’t fall off their bikes trying to negotiate the apples,” he advised before wandering off back to the cottage. As they sat on the gate enjoying their home-grown entertainment, Ray suddenly gave a yell as a crab apple bounced off his head. A second one hit Amy on the shoulder. Looking round, to their surprise, they spotted Uncle Ron crouching behind the wall of a pigsty with just his red face beaming out. This was totally out of character for him to be playing silly buggers but if that was what he wanted then they were only too happy to join in. A full scale crab apple war broke out as they leapt down and gathered up armfuls of apples and sent them whistling over the sties and heard the occasional satisfying grunt as an apple found its target. They pressed home their advantage and, being two against one, soon had Uncle Ron taking refuge inside one of the sties. He scrambled up onto a shelf and tried to protect himself under a pile of sacks. He still had plenty of ammunition so he managed to keep Ray and Amy at bay. Unfortunately for him, he had spent his usual hour in the kitchen after tea washing, shaving, and Brylcreeming his hair; getting himself all pampered and ready for his nightly trip to the local to meet his mates for a drink and a game of darts. His best clothes were now decidedly the worse for wear and suffused with the aroma of pigsty mingled with chicken manure which completely overwhelmed that of his aftershave. Uncle Ron only had himself to blame for his predicament. Then dad arrived on the scene, curious to know what all the noise was about. “Oh, come on you two, stop picking on your poor uncle. Call a truce so he can get to the pub for at least one drink before closing time.” “He started it,” Amy protested, but dad refused to believe that Uncle Ron could have started the bombardment in the first place. Uncle Ron quickly made his escape while they were still arguing. The end of the holiday arrived next morning. Amy helped to cram clothes back into suitcases and load up the car. Uncle Ron, penitent after the previous evening, gave her five shillings and Granddad gave her half a crown, a bar of chocolate and an early Christmas present of a tin of Quality Street to share with Ray. Amy could foresee the inevitable arguments over who had what looming. He also bestowed a large box of assorted fruits from his orchard. Dad came over with a suitcase. It was time to put his plan into action. “Amy, go and keep mum busy indoors while I fill the remaining space in the boot with a bag of chicken manure. Granddad said I could have as much as I want for my allotment but mum mustn’t find out or she’ll go bonkers.” “Don’t you think the smell might be a bit of a give away?” Amy asked with a grin. Just then Ray came sauntering out of the shed so dad called him over. “Ray, go and pick a large bunch of honeysuckle from around the toilet and spread it along the dashboard.” Ray, looking puzzled, just shrugged and wandered off to do as he was told. “That should solve the problem of the smell,” he said looking pleased with himself but Amy wasn’t so sure knowing how keen her mother’s nose was. After lunch they said their farewells and Granddad’s eyes welled up as he waved them off. Amy’s eyes watered a little too but that was due to the contents of the boot! All went well with dad’s subterfuge on the homeward journey as long as they kept on the move. They bowled along at a steady speed until they reached the town centre of Chelmsford where everything ground to a halt with road works causing a long traffic jam. By then the manure had heated up and was simmering gently in the boot. The unmistakable pong began to filter forward through the car until everyone was engulfed by the pungent stench. All the windows were quickly wound down. Ray and Amy hung their heads outside to gulp mouthfuls of fresh air while mum buried her nose in the honeysuckle. They received some odd looks from passers-by. The smell was awful but at least it helped Amy to forget about being travelsick. Dad duly copped a right verbal ear bashing from mum but he remained unrepentant. “It’ll be worth it when I grow prize winning vegetables to rival Granddad’s,” he said. “I just hope the vegetables appreciate the sacrifice we are making for them!” mum retorted from behind her bunch of honeysuckle. Dad was the only one who actually seemed to relish the robust smell pervading the car. They eventually arrived home after over four hours of very smelly motoring and Amy discovered her G.C.E. Art ‘O’ level result waiting for her. “I’ve failed!” she groaned, “all because I painted in the staging under that stupid still life.”

A lighthearted true story which takes the reader back to 1963, recording daily life for the Brown family. A year with one of the coldest winters on record which was mostly endured without the luxury of central heating. Sir Alec Douglas-Home was Prime Minister and President John F. kennedy was assassinated.

The Mod scene is burgeoning but for teenager Amy Brown and her friends, with no money to spend on the latest fashions, it's a case of improvise and make the clothes yourself. Beatlemania is taking hold as the Beatles reach the giddy heights with their music. Beatle haircuts and Beatle jackets are a must for any self-respecting teenage Mod boy.

Read about the confrontations Amy Brown endures with her vindictive headmistress and eccentric teachers at a school situated in the middle of a heath and split beween a beautiful old Manor house, reputed to be haunted, an imposing Grange and a large new building in the grounds.

Amusing predicaments abound as Amy lurches from one disaster to the next aided and abetted by her school friends during a year when elopement and even murder are lurking around the corner.

Having worked for many years as a supervisor in a computer department, she then ran a pet shop and garden centre before moving to rural Norfolk and setting up a breeding cattery. She has bred beautiful Persian cats for the last twenty-nine years and is now semi-retired with two lovely grandchildren.