Memories of the Moorish World, and Beyond 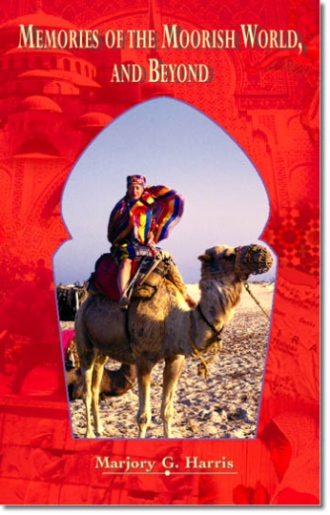 Memories of the Moorish World, and Beyond is a lively, engaging, and refreshing travel book. It is a world tour in the grand old style of luxury hotels, parties, and interesting, influential people. Marjory was interested in everything she saw, and takes the reader to exotic sights and places: to harems, pagodas, cave dwellings, and a camel-powered water system. She takes the reader, also, riding on ferries, rickshaw, and camels. Marjory also loves to shop, and frequented bazaars filled with jewels, silks, rugs, brass, and lacquered oriental ornaments.

Marjory began her travels on a three-week group tour to Spain, Morocco, and Tunisia, then continued on alone to Rome, Athens, Turkey, Lebanon, Iran, India, Thailand, Hong Kong, Japan, and Honolulu. She traveled in the late 1960s - a sixty-one year old grandmother - when a woman traveling alone was rare, and traveling around the world alone rarer still. This was a time, too, when the world still held secrets, and a woman could be shocked by belly dancers. When Arabic writing could be a mystery, and a man landing on the moon, truly unbelievable.

Marjory Harris was eighty-nine years old and legally blind when she first thought about writing. Although blind, her visual memories of ther travels were fresh and vivid, so she bought a computer, memorized the keyboard, and sat down to write of happy and exciting times. Memories of the Moorish World, and Beyond is about her first around the world trip, in 1969, and her first travel book.

Marjory was born and grew up in Vancouver, the daughter of the Hon. H.H. Stevens, a cabinet minister in R.B. Bennett's government. She nows lives in Kerrisdale, not far from where she grew up, and raised her own family.

she is now ninety-two years old. No longer writing, but busier than ever. Involved with researchers, editors, and publishers, getting the first of her five books off to press.

Click here to read about MEMORIES OF A DETOUR TO TURKEY