Volume One (Playing For Keeps: How To Love A Woman And Make Her Love You Back)
and
Straight Talk: Volume Two: (Papa's Got A Brand New Bag: A Man's Guide To Lovin' His Woman Down) 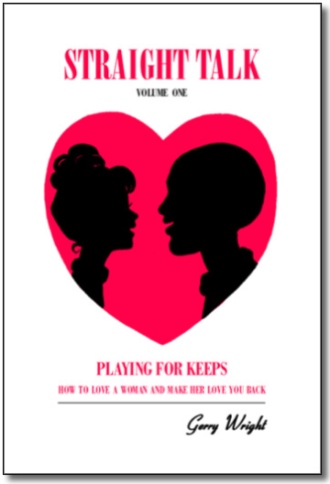 Finally! A Man Speaks to Men. Never have books promised to pry men away from their six-packs and remote controls to take a two-part course on the sport of seduction. As an author who has given new meaning to the word 'touch down' , he shows you how to 'touch her'. No subject is off-limits --- or out of bounds. So ladies, get ready to play ball!!

Straight Talk: Volume One
Playing For Keeps
***How To Love A Woman And Make Her Love You Back***

Round One - The Try-Outs

In this first of two sizzling volumes, Wright gives raw tutorials on winning a woman's affections. In locker room voice former pro basketball player Gerry Wright answers all the questions that aspiring Casanovas are dying (but too proud) to ask. From what to wear, to how to smell, to how to equip the bachelor pad, Volume I gets a man to first base ---without striking out.

Loaded with clever, hard-nosed information, Straight Talk elevates men from sitting on life's bleachers as all of the quality babes walk by to becoming an All-Star at love.

Unlike books like Men Are From Mars, Women Are From Venus, this two-book series deals with the real world, and gives the low down of what women really want --- in "guy talk"!

Crammed with nuggets of practical information spiked with sporting terms, Playing For Keeps is savvy, sexy, and funny.

Straight Talk: Volume Two
Papa's Got A Brand New Bag
***A Man's Guide To Lovin' His Woman Down***

Round Two - The Knockout

Volume I Straight Talk: Playing For Keeps got a fellow's foot in the door and into her head ---- Volume II Papa's Got A Brand New Bag pitches step-by-step details on how to perform in her bed.

Gerry Wright, personal trainer and former pro basketball player gets straight to the point --- most men are lousy lovers. Perceptive, real and wise, in Volume II Wrigt teaches men the blow-by-blow moves that leave a woman crying "time-out!" In the same no-holds-barred locker room style of Volume I, Wright explicitly coaches mankind on the sensual techniques to win over the opposite sex.

Based on the shared experiences on different continents as Wright played basketball, he delivers the low down on the sexual "left hooks" and "curve balls" - that American women are dying for men to throw. More than a primer on body parts (and yes) oral sex the book also instructs men to listen to their partners.

Perceptive, clever, and graphic --- Wright's instincts brand him as America's personal trainer at love. Wright's hand size (a full 11 1/4 inches spread) afforded him the ability to earn Sports Illustrated notoriety as a slam-dunk king. In two erotically raw volumes he gives tips that will have women in the palm of your hand (regardless of how many inches you're wielding). Wright's coaching a new team of men --- and, frankly fellows, she won't be trading you to another team after you read Wright's Straight Talk.

I went to a little book store called "Consider The Alternatives" on Thursday, April 19, looking for a book about relationships. I told Judy, the owner, that I have read many books to try to understand my man. And I couldn't seem to find one about women for men to read that wasn't just about sex. She called me at my home the very next day and left me a message that two books came in about the subject we were discussing and would I mind coming and taking them to read and review.

I went to the store the very next day and read the cover letter, then the contents of the books. I immediately took them home to read. I am 2/3 through Volume 1 and I can't put it down. You must promote this book every where.

Your book is heroic to all of us who have been criticized for saying the things you had the balls to say and say it straight. These two books must be marketed ASAP. Get the word out!

Thank-you so much for your gift to men and women. Your reward is very great.

Born on December 27th, 1963 and weighing only a mere few pounds, no one could foresee the giant strides Gerry's life would one day take. After achieving All American honors in H.S. basketball and simultaneously All State honors in music, Gerry accepted an athletic scholarship to the University of Southern California. He eventually left his beloved Los Angeles and transferred to the University of Iowa. Distinguishing himself as an outstanding student and athlete, Gerry was twice selected to the Big Ten All Conference Team and was a preseason All American as a senior. Gerry graduated with a BA degree in Communications in 1987.

Although he was drafted by the Detroit Pistons of the NBA, Gerry chose to serve in the military before pursuing a professional basketball career. He fulfilled his military obligation by serving as an instructor of fitness and self-defense at the U.S. Naval Academy in Annapolis, Maryland, and later as a Naval Aviator, stationed out of Pensacola, Florida. Gerry was honorably discharged and attained the rank of Lieutenant.

After the military Gerry played two seasons in the NBA's minor league, the CBA, winning the slam-dunk title at the league's all-star game. After testing the waters in the European league for one year Gerry returned home to California and joined the Los Angeles County Sheriff's Department. He served the county for two years before transferring to the Santa Monica Police Department, where he served two and a half more years.

While working full time for the SMPD Gerry continued to instruct fitness, martial arts, and women's self-defense at Santa Monica College. After nearly five years in law enforcement Gerry returned to the U of I as the athletic recruiting coordinator, and fitness/martial arts instructor in the Physical Education Department. However, after six years on the sidelines, basketball came calling once more. Gerry returned to Europe and played four more years. He was selected three times as a European All Star. After basketball he worked as an exercise specialist with a list of clients that included Royalty and dignitaries of state.

On a more personal note, Gerry is a well-traveled, well-read, cosmopolitan man who speaks Spanish fluently. He has lived in six different countries and has visited more places than most can count. Though quite successful in life, he has remained a quiet, soft-spoken gentleman who enjoys spending his free time with his "Spanish Fly" (his wife Eva), reading, writing, studying, cooking, listening to jazz, pumping iron and enjoying life. His motto? Carpe Diem