Travel Notes from the Asian Continent 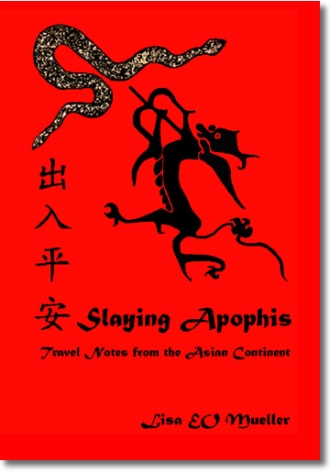 The experiences which form the basis of Slaying Apophis began in May of 1992 when I separated from my husband. I spent late winter through early spring 1994 traveling the Eurasian continent. Throughout the trip, sixteen students were under the guidance of three Eastern Michigan University professors and two tour managers. Under the rigorous conditions of travel, we got to know each other quite well.

The journey became primarily one of self-discovery. I found myself searching for meaning and direction. In the process, I wrestled with, and at least wounded, several of my demons. My observations were written down as I experienced or remembered them.

As I was preparing for publication what had begun as a private journal, I realized that some observations and class quotes were quasi-universals, philosophical road signs. I have highlighted these throughout the text as aphorisms, and compiled them all at the end of the book. Perhaps this composite picture of an adventure of discovery, and the wisdom gained, will serve others as well as myself.

As the Chinese couplet on the cover proclaims, "may you be blessed with peace and safety wherever you are."

Lisa Mueller currently works for a small biomedical company to pay the bills and finance her travels. Her written work has been published locally and nationally, and she has performed locally, nationally, and internationally. She spends her days courting adventure and her nights flirting with disaster. She lives in Ann Arbor with a cat, countless books and abundant plants.