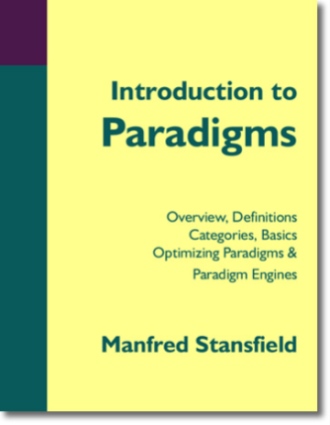 Introduction to Paradigms is a generic look at the things that help to clear up the crippling reality-paradigm confusion, which we all are susceptible to just in growing up. It demonstrates that:

A paradigm is a model of a portion of reality, with fewer dimensions and a manageable size, mass and energy.

Paradigms are necessary because they are the solution to the problem of having insufficient human RAM and CPU to be omniscient and deal with reality on a direct perception/knowing basis. The human solution is to create paradigms that do fit our RAM and CPU, so we can change the undesirable elements of existence into desirable ones.

Unfortunately, paradigms can be more true or less true, by accident or design, and that's where the rub is.

Through the incompetence of well meaning paradigm designers or

By the deliberate introduction of bias into a paradigm to give inequitable power and money to some who have not earned it. The bias is in the form of a lie in a paradigm or the miss- definition of a word. More money is made today by theft through paradigm bias than by the honest creation of wealth. It is not a victimless crime. The individual members of society as well as the society as a whole lose in wealth, a lowered pursuit of happiness and a lowered survival potential. Paradigm bias is a societal parasite and too many parasites kill the host.

Purveyors of paradigm bias are the same as confidence men. One trick they use is to convince you, that what they are telling you is reality when it is a paradigm. Reality, one tends to accept as true, while one questions what is known to be a paradigm. How do you tell the difference and what if you don't?

Example: My telling you about a tree gives you my paradigm of a tree, which can be more true or less true. On the other hand, the only way you get the reality of a tree is by seeing it for yourself; climbing it; feeling the trunk, bark and leaves; eating the fruit; chewing on a leaf, twig, bark; smelling the blossoms, cones, leaves, bark and roots; listening to the wind pass through the branches and leaves; standing under the tree when the sun is too hot or when it is raining.

Example: The 9/11 suicide pilots believed that what they had been told since early childhood was reality: That they would go to a paradise which was a much nicer place than this world and that they would live forever with seven virgins and seven wives if they died committing a mass murder as they were told. They did what they were told because they did not know the difference between paradigm and reality.

Reality is what you experience yourself. Paradigms are anything you received through a communication paradigm such as what some one told you or you read. We are all handicapped to the extent we are victims of the paradigm-reality confusion and prone to be taken advantage of through paradigm bias.

Is science the answer? Unfortunately, the scientific method applies only to explicate order phenomena that can be repeated and verified by the lowest common denominator of scientist. Science is still in denial of implicate order phenomena known for many centuries. Only a small fraction of the paradigms we need to function on a personal and societal level can be scientifically demonstrated.

Peer review is another shortcoming and abuse. The scientific method assumes that those doing the peer review are selfless, high minded scientists, experts in the same domain, who judge according to their knowledge in the pursuit of truth for the good of mankind. Actually, many peers are egocentric and lie to ensure their careers. Example: Tobacco scientists disagree with conclusive studies linking smoking to lung cancer. Who pays? If you believe them, you do.

Introduction to Paradigms sets forth a method of creating paradigms that are self optimizing in any domain as new discoveries are made. Winning synergies are produced by using several of these self optimizing paradigms in the form of a tetrahedral paradigm engine. In fact, once we get rid of the biased definitions of what we are and go where experience and reality takes us, we find that we are synergistic, composites beings with capabilities far beyond what is considered normal in today's world.

When we eliminate paradigm bias and the confusion between reality and paradigms, as well as create self optimizing paradigms that work on all levels, with synergistic paradigm engines, life takes on new possibilities. Introduction to Paradigms classifies and defines the different types of paradigm and the different roles people play in their creation, operation and maintenance. It shows how anyone can become the source of winning synergies.

This is a powerful how to book and reference.

Manfred Stansfield was born 1928 in Geneva Switzerland as an English and German national later to become a US citizen. After five paradigm shifts of school and country on two continents, it dawned on Manfred that he was not learning the truth of reality in school but rather local belief systems. It became his quest to learn what was true anywhere.

1952 he got his B.Ch.E from The Polytechnic Institute of Brooklyn after a disappointing (too much professor's opinion), try at pre-law at Duke University. He worked for a Fortune 500 company as a chemical engineer. He was drafted during the Korean non-war and became a military editor in the Adjutant General Division at HQ USAREUR in Heidelberg Germany.

He married, had two children, helped start a small international research and patent development company and then worked in a plastics machinery company designing and selling continuous double concentric screw mixers, extruders and process lines. Manfred was learning to sell figments of his imagination and then having to turn them into real process lines that produced the desired result-i.e., from paradigm to reality.

With no university giving courses or Ph.D's in the study of paradigms, Manfred had to learn what was necessary to become a paradigmologist outside of academia. His first book on paradigms was finished in 1993 and finally published in 2001, over half a century after he started his quest of truth and understanding the difference between reality and paradigms.