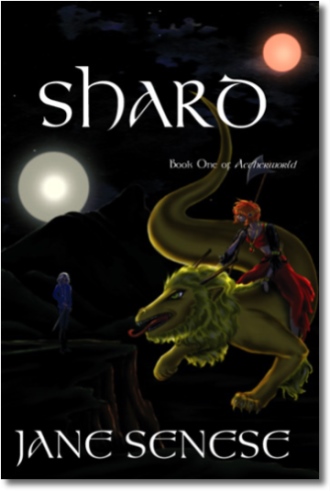 Four thousand years ago, the Great War raged across the Aetherworld, countless sorcerers battling to overthrow the golden age kingdoms. Then a formidable magic-wielder brought the war to an end with a cataclysmic weapon - the yúgure, a focusing crystal that laid waste to the entire continent and plunged the Aetherworld into the Dark Age.

Now the kingdoms have risen once more, and the Aetherworld is united under the New Age of Celaeno, the Empress of Nations. Growing up under this New Age is Shard, Celaeno's adopted son: a restless magic-wielder whose origins are a mystery and whose powers are uncontrolled. But beyond the walls of the royal palace, assassins are gathering, and mercenaries plunder Celaeno's emerald mines. A conspiracy is brewing in the wild Den´ren Wastes: a race to uncover a hidden treasury - and to find a deadly artifact more valuable than all the plunder of the Golden Age.

When Shard runs away from the palace life, he discovers a being from before the Dark Age: a fellow sorcerer trapped in a four-thousand-year-old sleep. In Sim Onmyóji, Shard finds a teacher who can offer him control over his wayward powers, and a companion who understands the restlessness within him. And together they must unravel the conspiracy before the treasury and all its secrets fall to the enemy; before the Aetherworld is once again forced into anarchy.

Shard, book one of the Aetherworld series, is a daring fantasy, offering a rich world of adventure as well as a provocative look at gender and sexuality in fantasy literature.

Jane Senese is a Greek and Roman Studies Major at the University of Victoria. While Shard is her first published novel, she has been writing all her life, honing her craft and experimenting with sci-fi and fantasy genres. A graduate of St. Margaret's School for Girls, she placed second in a writing contest sponsored by the Canadian Association of Independent Schools (CAIS). An accomplished scholar, she is looking forward to completing her Major at UVic, and hopes to become a career novelist. Jane Senese lives in Victoria, British Columbia, where she can usually be found at her laptop, working on her latest project.