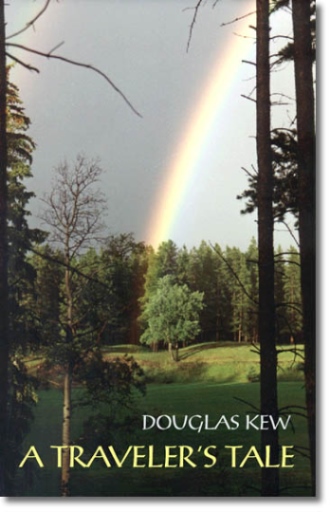 Poems from this book, narrated by the Author, can be viewed at http://www.facebook.com/pages/A-Travelers-Tale-by-Douglas-Kew/125656667490647

A book of thought provoking poetry and photos ... this is A Traveler's Tale.

One dollar from the profits of the sale of each book will be given to help the kids of this world. See videos and related photos at http://www.facebook.com/pages/A-Travelers-Tale-by-Douglas-Kew/125656667490647

"A relentless pursuit of happiness will weaken the spirit. Happiness should not be pursued, it is the predator. We must slow down from time to time and allow it to consume us," says the author of A TRAVELER'S TALE.

Born in 1958, Doug Kew was raised in Trimdon; a village nestled on a hill in the rolling, picturesque countryside of County Durham, North-East England.

At the age of thirty he immigrated to Canada, and with his new Canadian bride, Patti, settled down to life on the vast prairies of Alberta and Saskatchewan. His love of the ocean eventually took them to beautiful Vancouver Island in British Columbia, the place they now call home.

From farmhand: bricklayer; taxi driver; professional musician; and now truck driver, his passion for words and music has remained. From his earliest writing; "Through the Round Window" and "A Traveler's Tale", to the more recent "Thunderstorm", his poems tell of times happy and sad, and through them all runs a thread of hope and spirituality.

Though he loves his adopted country of Canada, he remains very proud of his Geordie roots and culture. This is so vividly expressed in his poem "Yam", written in his native "Geordie", it rolls merrily through fond memories of time spent and misspent. "I tried to write "Yam" as close as possible to some of the local dialects, though some sounds are difficult to write......... sowtle afftadee!" he smiles. Enjoy.

​The author invites you to visit his website www.douglaskew.com