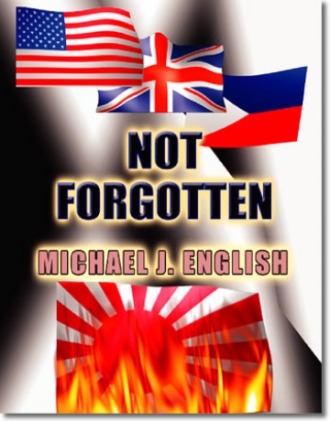 After the war, teenager Jay Winston witnesses the Tokyo War Crimes Tribunal and believes justice has not been served. As he grows into a man, conflicts with his sister Liz and a school teacher make him ever determind to keep his father's memory alive. And so he delves into studies and on going history that brings him into contact with ex-POWs and inside information about how the Japanese zaibatsu treated their prisoners, how Japanese Prince Chichibu secretly hid $100 billion of gold in the Philippines, and how the yakuza murdered his best friend. This drives the protagonist to become a US Congressman and seek justice from the powerful leaders in Japan. Along the way he is drawn into an expedition to recover and keep gold from fallling into the hands of Philippine President Ferdinand Marcos and Japanese syndicates.

As a congressman, he develops an agenda of five unresolved war issues. Yet every time he pushes the issues, he is blocked, and discovers wrongdoing by the US State Department and heroes Douglas MacArthur and Herbert Hoover. And so he, his sister Liz, and the woman he loves, Catherine Marino, take matters into their own hands.

Before the story ends, Congressman Winston is assaulted in Washington, his sister is abducted, there is a mutiny aboard his 100-foot ship WillyII, the $250 milion in gold he and his friend Chris Bray have recovered may be lost, he's at odds with the Speaker of the House about "Japan bashing", neglecting to care for American ex-POWs, and revealing Japan's Unit 731 atrocities. Building to a climax, Congressman Winston makes a crucial decision to oppose the Vietnam War and expose Marcos and the Japanese for looting gold. The outcome affects the rest of his life.

Born in Sacramento, California and raised with a brother and sister, after graduation from high school he served in the U.S. Air Force and formed a special interest in history. Thereafter, Michael attended California State University at Sacramento and achieved a Bachelor's and Master's degree in Economics, specializing in antitrust and industrial organization and public policy.

In 1989 he led GTE Telephone Operations' Malcolm Baldrige application and site visit teams. In 1990 he published "Service Quality Surveys in a Telecommunications Environment" to demonstrate how customer satisfaction surveying needed to focus on inspiring customer loyalty. In 1991 Michael co-authored "How to Manage Outside Consultants." Michael served four years (1993-96) as an examiner for the U.S. Malcolm Baldrige National Quality Award. During that period he shaped the Total Quality Management system of GTE Directories Corporation and played a key role when that company won the 1994 Baldrige Award. In 1994 he published "Evolution: Quality Means Value" and "Baldrige Examiners, They're Winners, Too." For three years ending in 1998, Michael served on the U.S. Quality Council V, an organization focusing on the next wave of improvement in the year 2000.

In collaboration with Christopher Bogan, during 1994 together they published the McGraw-Hill book Benchmarking for Best Practices: Winning Through Innovative Adaptation. Published in four languages, the book is highly regarded by performance improvement practitioners around the world, and is in production as a 2nd edition to be published during 2003. Michael is a partner of Best Practices LLC. He may be reached on the Internet at m.j.english@worldnet.att.net .

During 1998 Michael turned his attention to selective speaking, consulting and writing. In early 2001, he started the work to achieve the lifetime dream of writing a novel. He has written that story, and it is entitled Not Forgotten, a historical novel that dramatizes, excites and reveals how war can affect a family, relationships, lifetime purpose and have so many ripple effects on the future of humanity.