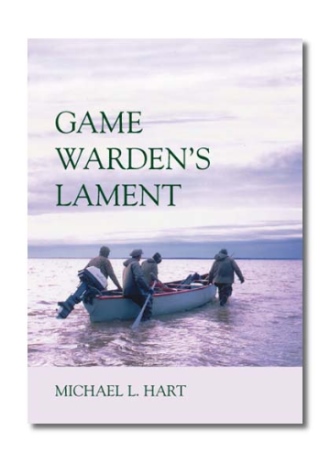 The author uses a collection of short stories to introduce rascals and characters who depend upon fish and wildlife resources for recreation, sustenance and livelihood. Night hunting poachers, trappers illegally working game preserves, unfriendly anglers, the terror and tragedy of wildlife encounters gone bad, and Aboriginal persons resisting government encroachment on treaty and traditional rights for fish and wildlife resources; all provide a rich background for stories of adventure and misadventure.

The author's stories share with the reader the emotions, smells, sounds, and scenery of lonely wilderness patrols when the Game Warden's bush lore and law enforcement skills are put to use in dangerous situations.

Although Conservation Officers continue to seek out persons breaking fish and game laws and use investigation and arrest to bring law breakers before the courts; the officer's work today is not the same as it was thirty years ago. What has changed over the years since the author began his sub-arctic patrols is the way the job is done. For many years, officers worked wilderness patrols alone and without radio communication. Claiming overtime was rarely practiced. Hunting and fishing with government equipment during quiet times made up a small part of the difference. The Department always came out ahead.

It was a time when Chief Rangers ruled the land with an iron hand and unions with their grievances and work-to-rule were only a quiet whisper for another time. It was a time when law enforcement was often conducted in ways that would, today, get an officer fired, and worse.

After graduation from the Ontario Forest Ranger School in 1967, Mike Hart was about to leave Canada to begin a forestry career in Australia when he was recruited as a Conservation Officer by the Ontario Department of Lands and Forests. Transferred to the Moosonee Deputy Chief Ranger Base, the author began a fish and wildlife law enforcement and management career that would take him from the Hudson Bay and James Bay frontiers to the magnificent Ottawa and St. Lawrence Rivers flowing through rural and urban south eastern Ontario.