The Last Chess Game or How to Be a Winner 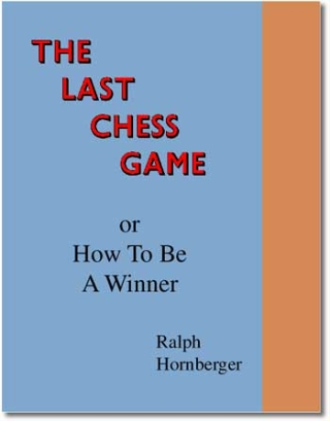 The Last Chess Game or How To Be A Winner is a fictional game of chess incorporating God's salvation plan. It reveals the way God enables us to be victorious in both life and death. The game is annotated. Also included are two fictional short stories written by students.

Ralph Hornberger has always loved to write; but until now his works have been short in content; editorials, essays, poems, newspaper columns, and a club newsletter.

Now he has composed what, for him, is a lengthy work - a short story entitled "The Last Chess Game", also sub-titled "How To Be A Winner". It is an allegory in which chess moves characterize human traits, undergirded by God's salvation plan.

A retired public school teacher, Mr. Hornberger has participated in a wide range of part-time jobs, and thereby has a wide range of experiences. He earned a master's degree in education at Philadelphia's Temple University, following a 2.5-year stint in the United States Coast Guard. His chess-playing acumen (he is rated an expert), has taken him into several surrounding states outside of Pennsylvania to engage in chess tournaments. He has a number of chess trophies and prize winnings to his credit.

In the past he has been very active in his church, serving on the church council and as charman of the missions committee. A born-agin Christian, now, at age 73, he is living a quiet, although busy life, with his wife Joan, near Langhorne, Pennsylvania.