Just When You Thought It Was Safe 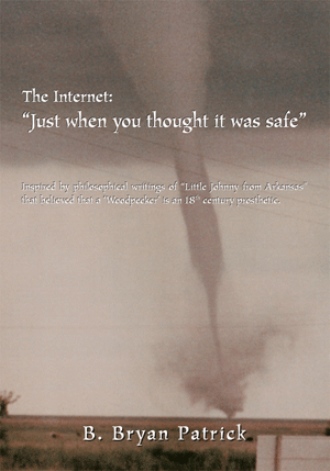 Adult oriented book of humorous stories and bizarre jokes intended to offend most people. Weird and crazy "Top 10 -Top 20 -Top 25 Lists" and many "Lists of things you would NEVER hear a woman...or Man say". Most of the material was received by the Author, a High Tech Executive, via E.mail over the last 10 years, but many from everyday life. The author also includes a Short Story he wrote about a disabled (of sorts) Vietnam Veteran. The story of his disability and the exciting life of today's US Postal service workers. The story is totally fiction, as the author never worked in the Postal Service. Over the years the author collected over twenty-five 3.5" x 5" Diskettes full of the sickest, weirdest, grossest and funniest jokes, stories, lists and one liners every created. "There is something in this book to offend everyone!" claims the author. "This book contains samples of American humor in the 21st Century . Because one would be thrown in jail for printing some of the stuff 50 years ago!" Everything from 'Blonde jokes' to 'Little Johnny Jokes' to 'Letters from a redneck mom to her slow son', which begins "Dear Son, I am writing the letter slow 'cuz I know you can't read fast"...To a 'List of Computer Viruses....such as the 'O.J. Simpson Virus- You know it is guilty of trashing your hard drive, but you just can't prove it!'

B. Bryan Patrick was a business executive for over 20 years, working with many of the "Fortune 100 Companies" Over the last 10 years, as the internet and e.mail became an essential tool for all high technology business executives and the best way to keep in touch with old friends, many jokes and humorous stories started finding their way into Bryan's e.mail box. Rather than forwarding them on to others like most people did. He copied them onto diskettes and saved them. He told anyone that sent him a joke or anything funny that "Someday I am going to write a book, and include your e.mail joke in the book". This usually resulted in a steady stream of jokes from that person. After about 10 years, Bryan had accumulated over twenty-five 3.5" x 5" diskettes full of jokes, funny stories, actual news articles of the weird and bizarre, and some of the best One-lines and "Top 10 - 20 - 25 Lists" in print today. After promising friends and co-workers he was going to publish a book of the best stuff he received via e.mail, being a man of his word, this book is Volume 1 of 2 volumes to be published. Volume 2 will be out as soon as enough copies of Volume 1 sells to make it economically feasible for the 2nd book to be published.

All of the stuff in Volume 1 comes from Engineers, Business Executives, Teachers, lawyers, etc. But, Bryan says, "the really sick stuff comes from guys I was in the services with. After 4 years in the military, and 13 months in Vietnam, a man learns to really appreciate the truly sick humor of America in the 21st century" And that is the essence of this book. It is a true example of American Humor today. Few societies would appreciate this kind of humor. Indeed, many societies would put you in jail for publishing some of this stuff! But that is what makes America GREAT. FREE SPEECH!

Watch for Bryan's fictional autobiography. About a young man that left home at 16 years old to assume the responsibilities of a US Marine and go to war. The story is based on true experiences, but as one starts re-telling the story of his life, the story usually ends up much more interesting than what it really was. Thus, the FICTIONAL autobiography.

It revolves around Bryan and many of his fellow former US Marines and Vietnam Veterans. They get together for a week once a year and travel into Mexico's wilderness and deserted beaches. Over the years they establish close friendships with a tribe of Seri Indians living on the east coast of the Sea of Cortez in the Mexican state of Sonora. One of the tribal leaders turns out to be a former US Marine they had served with at Camp Carroll and Dong Ha Combat base on the Cam Lo River just South of the DMZ in Vietnam by the nickname "Tambo". He was sent to a private school in the USA when he was 12 years old, and going against his fathers wishes, enlists in the US Marine Corp once he turned 17 in 1967.

One of the few topics the guys do NOT discuss is their experiences in Vietnam. But with the philosophical insight and historical expertise of war veterans they discuss and usually completely misinterpret the true meaning all of the major events of the 20th century. Over the years the bitterness of the Vietnam experience dissipates and is replaced by the sick and demented humor of the over the hill warriors. As an example, in discussing one of the icons of American Culture in 2002, Martha Stewart, They have this insight; "Do you know how you can really piss off Martha Stewart TWICE in one meeting?" Three guys respond in unison "No, How?" "Well, fuck her in the ass, then wipe your dick on her new curtains" Things get really gross after that one as each guy tries to out do the other. As you can see by the example, it is a "MUST READ" for and true American literary fan.