Every Day's A Weekend

An Insider's Guide to Early Retirement and Exotic Travel 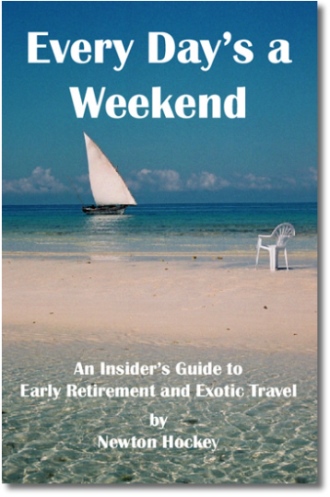 Horse Riding in the Jungle The most memorable horse ride was when we were invited to join a group of Costa Ricans on an expedition to find some caves in the mountains of Cerro Muerte. There were nine riders with two packhorses. Two of the riders were campesinos acting as guides. The organizer was a gentleman farmer called Vinicio, who operated a bus importing business in San Jose. He would drive old school buses from the U.S.A. to his factory and rebuild them for the terrible roads of Costa Rica. His beautiful girlfriend, Alejandra, accompanied him on the trek. Also with us was an American, Rick, and his athletic wife, Ileana, who was a gold medallist cyclist in the Pan American Games. Rick had moved from Alaska where he ran a windshield repair shop and had opened a similar shop in San Jose. About the only thing that Alaska and Costa Rica have in common is bad roads. We set off at 4:30 A.M. in total darkness and began to climb very steeply almost immediately. We passed peasants headed down the mountain on foot with goods for the market. It was hot going, even at that time of the morning. We stopped only briefly from time to time for drinks and by noon we had reached a campesino's hut with an outstanding view over idyllic scenery of cleared land and jungle. We understood the reason for the early start when the heavens opened just after we arrived and the downpour lasted several hours while we rested after our long trek. In the evening we cooked the chilli con carne that we had prepared at home and frozen for the journey and sang songs on the deck to the strains of a guitar played by Ileana. Other than our oil lamp and candles, there were no lights for miles, and the stars shone more brightly than we had ever seen before. We went to bed early that night to prepare for our trek on horseback and on foot the following day. The going was steep and tough, and finally we had to abandon the horses and slash our way through the jungle with machetes. We came across a valley, which had been cleared for crops, and a farmhouse near a river. One of our guides approached the farmhouse, spoke with the farmer's wife and told us he had arranged for lunch for our group on our return from the caves. The final assault to the caves involved an arduous climb, which was made worse by the heat of the midday sun, but we all made it and entered the cool caves with relief. The only light we had was from our flashlights, and it was pretty eerie, especially when we realized that few people had ever been here before us. The local residents of the cave were enormous spiders, and we soon cooled off and left for the safety of the daylight outside. The clamber down to the farm was quite tricky but the thought of food and a cool drink drove us on. We were somewhat dehydrated and drank voraciously from a nearby stream. The farmhouse with its mud floor kitchen was a surprise to us, but it also boasted a sleeping area of beautiful wood floors in a series of bunk- bedded rooms, all in immaculate shape. The lady had borne twenty-two children and twenty-one were alive with most still living at home. A new grandchild, less than a week old, was being nursed, and other grandchildren were scattered around the house and garden. A grand feast had been prepared for us--after all, what are nine more guests for lunch? After lunch we relaxed and enjoyed the outstanding jungle scenery and watched as twelve toucans flew into a tree nearby. I was able to catch this rare sight on my video camera. We returned to pick up our horses and make our way back to our campesino's house for another night, totally exhausted. Our guides were not tired and they unsaddled and washed the horses down for us. The guides were up before us in the morning and had saddled all the horses and loaded the packs ready for our trek home to Londres. We reached the ranch from where we had started and felt tired but happy after the unique experience our new Tico (Costa Rican) friends had given us. The whole trip was free to us and the guides refused any payment. We got around this, though, by giving them some tools, which they could use in their fields. We were able to relive our trip a week later by looking at my video in San Jose; in fact, we have done so on several occasions in Canada as well. I shall always remember the woman with twenty-two children and the twelve toucans in one tree outside her house.

Most people dream of early retirement and of travelling to exotic places. This book describes how the author and his wife realized that dream by retiring at fifty years of age and travelled the world on a modest budget. It presents ideas on how the reader can do the same thing. It describes the countries and people who have given the writer a wonderful first ten years of retirement while his friends are still busy working. Humorous anecdotes are incorporated to illustrate the experiences of living and travelling in third world countries.

The book will appeal to a very large market as it focuses on the dreams and aspirations of all those people over forty who would like to retire but who need encouragement to do so. It is an inspiration for its readers to reach their personal goals.

Places described include: Central America, South-East Asia, Australasia and the British Isles. Emphasis is placed on the people encountered and the stories surrounding them. Maps and photographs illustrate the book.

Born during the Battle of Britain, Newton was educated in Newport, Monmouthshire and in Nottingham University where he received a degree in Electrical Engineering in 1963. He worked in Steel Mills and Pulp Mills in the U.K. and Canada before becoming a Consulting Engineer in Vancouver, British Columbia. Later, he became a High Tech Marketing Consultant and retired in 1990.

Published works include technical articles for international lighting periodicals and building magazines as well as travel articles for local newspapers.

Newton and his wife, Noreen, now live in Sidney on Vancouver Island where they enjoy life walking a Golden Retriever. They are both active in their local community and still arrange tours to exotic places for small groups and share their considerable travel experiences. They have taken groups to Bali, Tunisia and Cuba and continue to visit Honduras, where they own a beachfront property. Newton has three adult daughters living in England and a step daughter in Vancouver.