Making Love With Our Eyes 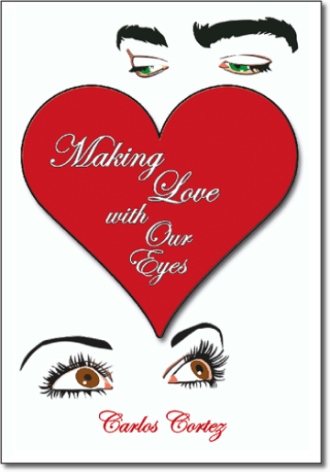 In the search for romance, meeting the "love of one's life" appears to many as a formidable, if not nearly impossible dream. "Making Love with Our Eyes" is about love and the quest for love. It is also about hope. Everyone hopes to find their destiny, their "special love," during life's journey. Will they? That's one of the questions that prompted the author to write a book based upon his own quest for the "love of his life."
As the author states in his book: "Real success in finding love is based more on what we fail to see or understand that what might seem to be the obvious." In this book, the author details a course of action by which anyone can be ready when the enchantment of love enters into their life. This is one of the main purposes of this study guide; finding that "special kind of love." We are all deserving of love. It can also be said than an extraordinary love awaits us all. All we need to be: is ready. Those fortunate ones that have already found their one true love, will read these pages as an affirmation of all they know to be true. For those still searching, this book is especially for you.
Much more than just another how-to book, this study contains chapters specifically for dealing with how one may prepare for their own quest for love. How to go about being at the right place at the right time, while becoming the best "me" that one can become is described in a poignant, at times humorous, always refreshing style. Learning how to avoid "kissing toads" and other pitfalls in the game of love are clearly described. No challenge is presented without providing a means of achieving success. Included are note pages, an idea suggested by the author's wife. Every reader shall come to appreciate that value that this personlization affords.
"Making Love with Our Eyes" portrays the search for love and the realization of one's dreams come true in a manner that leaves no one left in the dark. Throughout, the author shares his very personal experiences, both positive and negative, that culminated in his own successful quest for his one true love. This book is a must for all those who seek to love and be loved.

Carlos Cortez, the son of a Colombian immigrant and a Puerto Rican mother, was born in New York City. At the age of one, his family moved to Alexandria, VA, and subsequently to W. Palm Beach Fla. His father, the son of an Argentinian military captain, moved to Colombia, S.A. after the family suffered the misfortune of being on the losing side of the revolution. His mother's family descended from nobility in northern Spain, settled in Puerto Rico.
After years of struggling with his own demons, Carlos began his own journey of recovery in the late 60's. This became a turning point in his life. Getting his life back, as he says, he began to employ those writing skills that had been dormant for many years. In addition, he commenced to develop his skills as a public speaker and seminar lecturer. For someone who had skipped class rather than face giving a book report, this was a rare accomplishment.
During his life, "truly" falling in love seemed to be what eluded him the most. Regardless of circumstances, that occurrence never seemed to become a reality. Uncertain if true love could happen, or if he were even capable of experiencing it, he sought a divorce from his wife in the mid 80's. Deciding to risk all rather than to never know for sure he began a quest for the "love of his life." As he stated, he wasn't sure if she could be found, or if she existed at all. It was during this period that the seeds for "Making Love with Our Eyes" were planted.
In 1986, Carlos married the "love of his life." His quest had been successful beyond his wildest dreams. his experience, his keen insights into human nature based upon years of "people watching," the profound awareness developed through mentors and by traditional twelve step practices, as well as his background as a lecturer and speaker became the fertile ground that brought forth this study guide.
Carlos and his wife, Beverly reside in Florida. Together they have five children and thirteen grandchildren. He says, "Regardless of external circumstances, we have always maintained a deep and abiding love for each other, a love that supersedes all considerations. What we found has always remained with us, only more so with each season of life and love."