On the Wings of Habitat 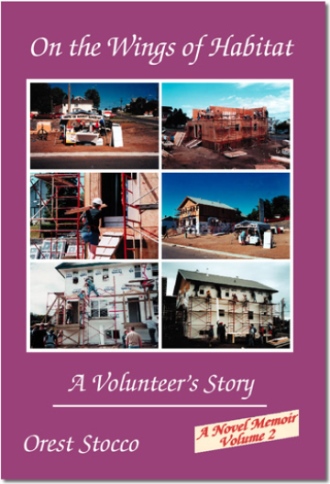 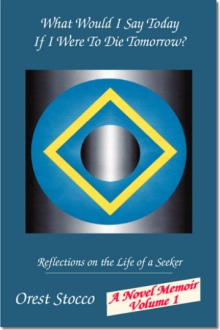 What Would I Say Today if I Were To Die Tomorrow
Orest Stocco
$23.50

Habitat for Humanity is a worldwide organization that builds homes with volunteer labour for needy people. Without volunteers to build these homes, Habitat for Humanity wouldn't exist; and ON THE WINGS OF HABITAT is a novel that explores the unique character of one specific Habitat volunteer, a mystery man called Tom Hudson; and in so doing, the story sheds light on the spiritual benefits of volunteerism.

The three questions that this novel seeks to answer are:
1. Why do people volunteer their time to a cause?
2. What's in it for them?
3. What kind of people are volunteers?

The narrator of ON THE WINGS OF HABITAT is a man who is not only a tradesman (a housepainter and drywall taper), but a seeker-writer; and it is his eclectic spiritual perspective on life that gives this novel its mystery, tension, and page-turning excitement.

ON THE WINGS OF HABITAT is a love story. Two volunteers fall in love during the blitz build, Tom Hudson and Lorie Maki; but as critical as this love may be to carry the story along, it is Tom Hudson's profoundly disturbing Christian dilemma that gives the story its drama.

Tom Hudson strikes a friendship with the narrator, Oriano DiFelice; and through this friendship his dilemma is given some measure of resolution, but only upon the condition that he rethinks some of the fundamental Christian premises that he holds dear.

Because of the narrator's unique spiritual perspective on life, tensions arise between Tom Hudson's Christian beliefs and Oriano's belief in the Spiritual Laws of Karma and Reincarnation.

This tension between traditionally held Christian beliefs and individual spiritual beliefs is also poignantly revealed in the character of Norman James Gauthier, a gay Roman Catholic Habitat volunteer who plays an important part in carrying the story to a happy resolution.

The central character of ON THE WINGS OF HABITAT is the narrator. What makes him so fascinating is his profound grasp of the spiritual life. Through him the reader is led into the mysteries of Christ's mind-boggling teaching of spiritual rebirth, and how Oriano DiFelice came to grasp the secrets of this misunderstood teaching is what makes this novel such a unique memoir, and fascinating read.

"The purpose of life," writes Orest Stocco, "is to become a giver, not a taker." And in his novel memoir he explores the nature of goodness which defines the volunteer.

A captivating story woven into the Habitat for Humanity millennium blitz build in Thunder Bay, Ontario, ON THE WINGS OF HABITAT will awaken you to your own potential for goodness. It is a story that goes against the currents of contemporary literature and dares to speak the truth about man's spiritual purpose in life.

ON THE WINGS OF HABITAT is a daring, provocative love story that will inspire you to rethink your priorities and connect you with your inner self, and fellow man.

OREST STOCCO was born in Panettieri Calabria, Italy. He emigrated to Canada with his family and studied philosophy at university.
He lived in France for a time before taking up residence in "Eckshar Place," the home he built with his fianceé in Nipigon, Ontario where he operates his own business and writes short stories, novels and poetry.
Orest Stocco is also the author of What Would I Say Today If I Were to Die Tomorrow? Reflections on the Life of a Seeker

Click here to read about WHAT WOULD I SAY TODAY IF I WERE TO DIE TOMORROW?