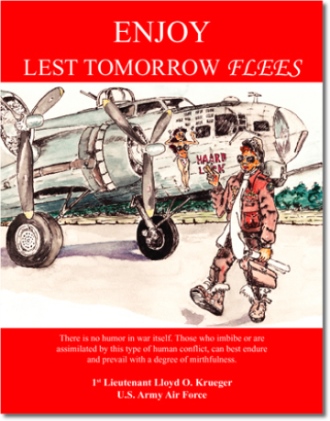 During the writing of COME FLY WITH ME, a story about some of my experiences while flying combat missions in the Air Force during the World War II, I was constantly discovering the whimsical and ludicrous events that helped me enjoy and, at other times, endure those 1200 days of my life. Each day would be interspersed with moments of mirth, intermingled with the times spent in serious contemplation, or performing required duties.

This book endeavours to record, in some chronological order, the humorous and humanistic incidents that occurred to me and many of my friends. From the moment, I enlisted in the Air Force cadets in July of 1942 until I received my Honorable Discharge in October 1945, I recall with fondness these many memories. I believe this generation grew up with a sense of humor that would prove to have a therapeutic effect on each of our dispositions and state of mind. We can take pride in the legacy we gave the world...freedom must be cherished.

Prior to "Pearl Harbour", Mr. Lloyd Krueger attended the University of Wisconsin as an Engineering student. In 1942, he volunteered for the Army Air Force and ultimately became a Navigator on B-17s. Krueger flew out of England with the 95th Bomb Group. All but 9 of his 35 combat missions were as a Lead Navigator.

After Krueger's tour of duty in Europe, he joined the Air Transport Command and ferried military to all corners of the world. On many of these return trips they brought back war weary planes to the United States.

After Krueger's discharge in 1945 at the end of the war, he attended the University of Michigan and graduated with degrees in Architectural Design and Engineering. He practiced Architecture as President of his own firm in his home state of Wisconsin and also in all adjoining states until his retirement in 1974. Mr. Krueger was President of Solar Track Industries until he retired permanently in 1985. He also was a Director for Wisconsin Mutual Insurance Company for 24 years.

He has written three books concerning different aspects of his military career, namely COME FLY WITH ME, THE TRIALS AND TRIBULATIONS OF A LADY and this current book, ENJOY - LEST TOMORROW FLEES. He and Norma, his wife of 58 years, have established a Charitable Trust that annually awards a complete four-year college scholarship to a Native American Indian high school sophomore.