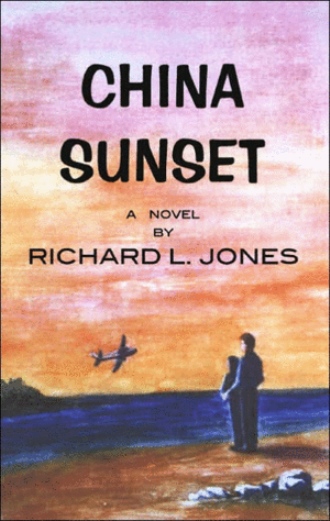 American flyer Mark Wilson was working for an American Freight carrier in China when he finds himself stranded. He and his friend and co-pilot, Ralph Denning, are assigned the task of staying behind to load and fly the company's heavy equipment from Hahgzhou, China, to Hong Kong, where the company was moving because of the Communist take over.

Mark and Ralph are shot down by fighter planes while taking off. Ralph is killed. Mark returns to Hahgzhou to ask his Chinese house boy to help him get to Hong Kong. He cannot find him and is stranded.

He is shot by Communists soldiers while trying to get out of town, but is rescued by Nationalist Patriots who agree to help him. While recovering in the Patriots hideaway, he meets a Eurasian girl, Teriko. They eventually fall in love.

Turmoil separates the two when Teriko is assigned a job with the Patriots and Mark goes to Formosa to become an Flight Instructor for the Nationalist Air Force.

Teriko works as a dancer at a Communists officers club, eventually meeting the Commandant of the fortress. She moves in with him in order to get information for the Patriots.

During one of Mark's training missions a student is shot down by a Communist fighter plane. Mark tries to rescue him when he crashes on the Mainland, onlt to find the student is dead and his body is trapped in the airplane. Upon leaving the area Mark is captured and taken to the fortress where Teriko was assigned.

The Communists are using drugs to make Mark confess he is flying for the U.S. They want to involve the U.S. in the China conflict to show the World that the U.S. is interfering in their civil war.

The Patriots help rescue Mark and Teriko but while escaping the Communists force their truck over a cliff. Teriko is injured badly. Mark carries her down to the beach but is shot by the pursuers. The Nationalists from Formosa had been looking for Mark and the student pilot and were able to rescue Mark and Teriko.

The Korean war starts and Mark resigns from the Nationalist Air force and rejoins the U.S. Airs Force in Japan.

Richard Jones grew up in a small town in Kansas during the Great Depression. He contracted odd jobs in his preteens and worked with his Dad as a building contractor.

He loved flying and while in High School he spent every penny on flying lessons, receiving his private license during that time.

When he graduated, he joined the Navy and was assigned to the Amphibious forces. His ship was sent to Hong Kong to support the U.S. Consulate during the Communist take over of mainland China in 1949.

During his tenure in Hong Kong, the Korean War started an his ship was ordered to Japan to prepare for the Inchon Landing on September 15, 1950. They landed the Marines 1'st division on Wolmi-Do in the morning and were the control vessel for the Inchon landing in the afternoon. Later they were assigned to the East coast of Korea making many raids and destroying bridges and tunnels supporting British Commandos and Underwater Demolition Teams.

Jones returned to the San Diego Naval Hospital due to injuries after about eight months. He was medically discharged from the Navy. In 1952 he joined the Northrop Aircraft Division in Hawthorne, California. He worked there for thirty-one years and retired as an Executive in the Manufacturing Engineering operation supporting Design Engineering in developing new technology for future aircraft.

Upon retiring, he moved to Colorado and established a Manufacturing Engineering Consulting Company and worked for the U.S. Census Bureau, among other tasks to keep him busy. He loved writing so he now is using some of his memories since he can no longer do physical labor.