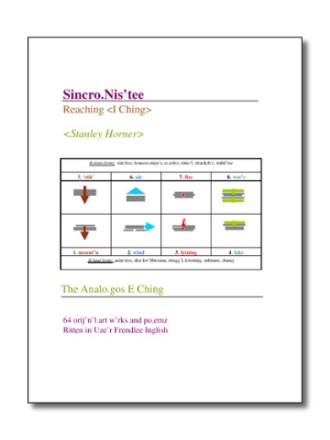 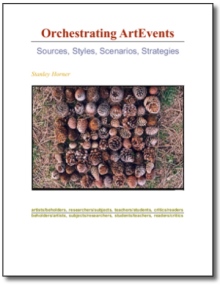 Sincron.Nis'tee: Reaching <I Ching> - The Analo.gos E Ching: 64 orij'n'l imajes and po.emz is the first full-fledged example of iiae, interActive interDisciplinary art education; education through art/art through education for the new millennium. The details of iiae are available in The Subject of Art in Process: Undressing the Emperor's Nude Close (ISBN 1-55212-327-8); ARTS Press @ Trafford

Stanley Horner, formerly a Professor of Studio and Art Education at Concordia University, MontrŽal, grew up in the remote Upper Ottawa Valley, Canada; he currently resides with his wife in Victoria, BC, where he works with traditional and high-tech visual media, music and text; he has two children living in Montreal. Visit his website at members.shaw.ca/iiae/index.htm

Other books by Stanley Horner include: Orchestrating ArtEvents, The Subject of Art in Process. And Too Near by Far (available at iiae2@hotmail.com).

Synchronicity, Analogos I Ching also launches UFI (Uze'r Frendlee Inglish), into the public domain. UFI is a new notation system that is capable of carrying aspects of the vocal sounds of a speaker-of-English along with the meanings already possible when writing Standard English Text. UFI introduces only two rules that are completely new: 1) a vowel with a dot after it is pronounced as a long vowel sound (a-e-i-o-u as spoken when saying the alphabet); 2) a slur or short-short vowel (written as an apostrophe, mostly inside a word) is pronounced like the 'oo' in the word 'good' (in Canada). All the other basic 'roolz' are 'natural' to readers and writers of English; these rules are included in the AppendixÑwritten in UFI.

The Analogos I Ching numbers are different from those standardized in other I Ching texts; this became necessary because the Analogos paradigm insists on an order that helps users to remember patterns and understand the relationships between the different sites of the I Ching. For ease of translation between the two versions, they are juxtaposed on the back cover and on page 19.

A cursory look into the Analogos paradigm (concept map) is also offered; a more complete version, including many examples, can be found in: Horner, The Subject of Art in Process. Each site page, in Part iii, includes the title of the work, the verse, and both the Analogos I Ching number and the corresponding traditional I Ching number, along with examples of traditional titles and traditional interpretations. It is recommended that users consult at least one other I Ching text after consulting a site in Sinchro.Nis'tee / Synchroicity to extend the ideas; several resource I Ching texts are listed on page 171.

The new version of Sinchro.Nis'tee/Synchronicity (2004) includes a new format and many more and much larger illustrations. (There are now 136 as compared to 64 previously). The use of the ufi text is now focused on the poems and is used less elsewhere throughout the book. The inclusion of information about the ORG (Open Response Gallery) project was not possible in the earlier edition as it was only incorporated as a Non-Profit Society in 2003. Accordingly, the iiae response process (briefly outlined on page187) can hopefully encourage the development of a community of voices. Readers are invited to submit work to the ArtBankORG and as such can become a part of the Open Response movement. Brief notes on the orientation of the ORG Project are on pages 168, 169, and information about the submission process is included on page 187. For information about the internet version of this Reaching I Ching series of artworks and poems, readers can gain access to the project through the Trafford or Horner web site: