Warrior Spirit Running to the Sound of Gunfire

by Jim Keen & Cover design or artwork by Jamie Larson-Wagner 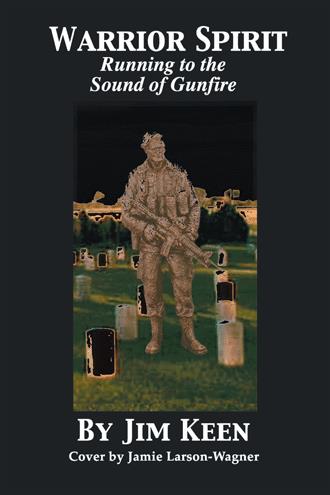 In Warrior Spirit, Running to the Sound of Gunfire a young Airborne Ranger is shot off of his motorcycle while attempting to rescue 1000 American medical students on the Caribbean island of Grenada. 15 years later, a four man Special Forces team is attacked by an angry Serbian mob while on peacekeeping missions in the former Yugoslavia. Gunfire erupts, and the Airborne Ranger kills his Serbian brother. His son is born with a rare blood disorder and dies at age nine of an aneurysm while on a family hike in the Rocky Mountains.

The above events, plus many more, inspired the author to write this 398 page novel. Warrior Spirit is based on his true-life story: that of a modern day Special Operations Warrior. The story is not all blood and guts and appeals to both male and female readers. It takes you through slow, rural ranch life and the marriage of high school sweethearts to exotic adventures with the United States Special Operations Command. Every emotion from love to fear to humor keeps the pages turning.

Jim Keen was born in Wyoming on a cattle ranch and lived his childhood on his family's cattle ranches in the Midwest. At 18 Jim enlisted as an Airborne Ranger in the U.S. army and started his twenty-year Special Operations career. Jim served sixteen of the twenty years in Ranger and Special Forces positions. He has lived an exciting Special Operations life, drawing hazardous fire pay and campaign ribbons in Grenada, Iraq, and Bosnia. Jim was wounded in action twice, once being shot off a motorcycle as Ranger scout in Greada, and a second time being attacked by an angry Serbain mob in Bosnia.

Jim received his first Purple Heart from the Chief of Staff of the Army, General (Retired) Wickman in 1983. He worked for Generals Abbizade, Grange, and Tony when the three were company and field grade officers at Company, Battalion and Group Level. He was awarded the NDIA (National Defense Industrial Association) Special Operations Low Intensity Conflict Soldier of the year medal for 1999.

With his slow, soft western drawl Jim has the ability to tell a story and make up words that will keep most folks on the edge of their seats laughing and crying in the same breath. This natural ability has sprouted from an event-filled life. As a storyteller and author he attempts to portray each emotion and feeling possible, sometimes ending with a twist. After numerous contacts and friends encouraged Jim to write his story, he has finally given in and written a book based on his true-life story. Jim began writing and performing poetry, music and stories as a hobby as a youngster. Now Jim and his family enjoy traveling as Jim performs his poetry, music and speaking for churches and organizations. He has been married to his high school sweetheart Roxie for 20 years. Roxie is a registered nurse working home health care and Hospice. The couple has three children, a late son Austin who died on a family hike in the mountains at age ten (to whom this book is dedicated) and two daughters, Britany and Cassie.

Jim and his family live on their small hobby ranch in Southern Colorado where readers and friends are always welcome to stop in and help with the haying, irrigation or horses. You may even get the pleasure of hearing Jim spin a yarn, tune or a story. Jim is now retired and continuing his education at a nearby University. He is hoping to finish up his bachelor's degree in Sociology with emphasis in Criminology and hopes to start a new career in the field of law enforcement. Jim will always be a writer, story-teller and warrior.