Infinity... Creation of a Universe 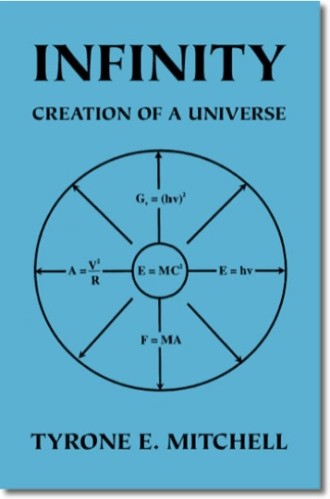 Discovering what we are has always been the primary goal of physical science. Physics is a description of the physical universe in which we dwell. Currently, it is like a picture puzzle with missing pieces. Each piece of the puzzle we now have represents a discovery, observation, or explanation made over the centuries by the greatest of scientist.

Theoretical physics is the explanation of the missing pieces. It attempts to describe the unknown links between the proven segments of physics. In many cases, it attempts to explain that which will never be proven.

Infinity... is a book describing the missing pieces. With the use of two master keys, the relationship between C and h, his book will prove beyond a reasonable doubt whether the universe is finite or infinite. Its keys will unlock the secrets of the universe and link all the segments of the universal puzzle together.

One need not base the explanations contained in this book simply on faith. Each explanation, linking each segment of physics, is backed up with a clear and comprehensible classic example based upon sound principles and laws already proven to be true.

Upon completion of this book, you will understand the universe as you have never understood it before. You will not be able to deny its validity. The simplicity of the grand design will astonish even the most adverse critic.

An international science award winner in computer logic and for thirty-two years a student of physics, the author looks at the mechanics of the universe and reveals its magnitude.
Having an industrial degree in electronics, author Mitchell has experience and a fundamental understanding of force and energy and the physical laws that apply.