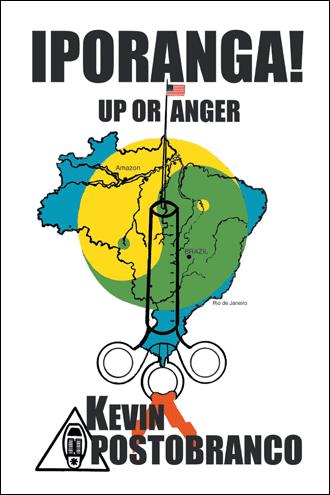 In 1969, Dr. D.M. McArtor, Deputy Director of Technology for the US Dept. of Defense went before the Senate Committee for Approbations & requested $10 million to design a virus that is ''refractory to the immunological systems .

In 1970, Dr. McArtor was granted the $10 million by the US Government to invent the AIDS virus.

In 2000, feeling drawn to Brazil, the author arrived in the town of Iporanga, Sao Paulo where it is common knowledge among the residents that the US Army has been conducting some kind of secret experiments in a nearby cave hidden in the jungle in 1970.

Impossible events occur on a regular basis, & previous to arriving in Iporanga he was shown through a series of coincidences that with the letter 'A' in front of his name, his surname is Apostlethwaite, or Apostobranco. On his second night, Kevin used a strange sentence for the first time & told a young doctor whose days are filled with AIDS victims; "I'm a white blood cell, I go where needed." In answer to her question regarding why he was there.

The local residents were obviously victims of some kind of mind control. There are people in the valley that can't remember when their parents died, & another who can't remember that her husband died of AIDS. All of these things were more than enough to convince the author that he was no longer just a tourist but had assumed the role of a character in a legend.

Iporanga! is an expose of numerous crimes against humanity. It's the true account of the discovery of the origin of AIDS & the bizarre series of events that surround it - an account of impossible coincidences & miracles, the misery of AIDS, & the terror of being chased by an army through the jungle in Brazil.

Kevin Apostobranco was born and raised in Calgary, Alberta, Canada. Working most of his life to improve his skills on various musical instruments and learn as much as possible about human emotions and spiritual development. He is currently living in Vulcan and is working on the second book of the IPORANGA! Trilune.