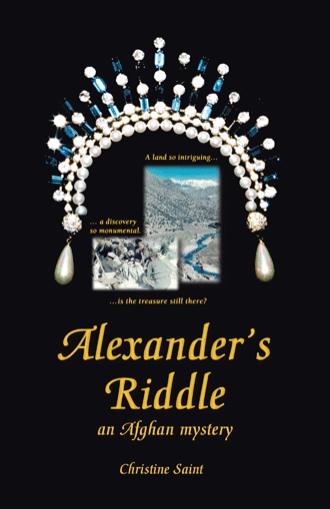 Young French archeologist, Dr. Claire Dorval, is drawn in 1967 to the then peaceful kingdom of Afghanistan to examine an engraved stone found in the Hindu Kush. In the process, she discovers a 23-century-old message from Alexander the Great concerning a reserve hidden for his Afghan Queen, Roxanne, in case something happened to the young conqueror.

The "riddle" relates to where the reserve was left, and the question of whether it's still there is a monumental one. Alexander inherited from ancient Persia some 3,000 tons of bullion and jewels worth more than 20 billion of today's dollars.

Claire's discovery leads to a suspenseful search, to political intrigue, to danger, honor, and a poignant and compelling romance.

Set against the magnificent background of Afghanistan, the novel takes us from the towers of Notre Dame to the lofty peaks of the Hindu Kush and from the heights of earthshaking archeological discovery to the wondrous depths of the human heart.

One of the first western women to live in nomad camps of the Hindu Kush (little changed since the passage of Alexander the Great), Christine Saint blends facts and fiction to weave an unforgettable tale of intrigue and romance.

Saint is of French origin and has lived in France, Morocco, Gabon, Afghanistan, Cameroun and the U.S. She holds degrees from the Universities of Grenoble and Texas and now lives in Dallas with her husband and two children.