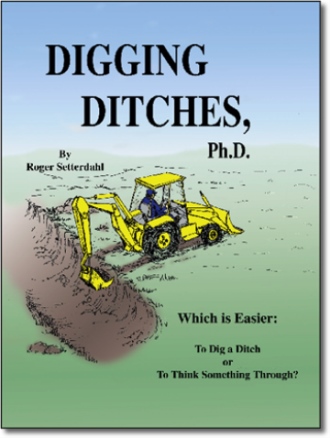 Why is it easier to accept someone else's view of God, instead of "thinking for yourself?"

The content of this book presents a picture of God that, in the opinion of this author,
is difficult to find in the Christian world today.
How does the Christian world view God today?
Is Jesus gentle, meek and mild,
while God the Father is mean and wild?
Is God: Harsh, Unforgiving, Unreasonable, Demanding?
Will God torture and burn people for as long as God shall live?
What kind of God would do something like that?
If God is that way, could you trust him? Would you want Him as a friend?
Would you really want to spend eternity with someone like that?

Presented from many modern-day pulpits by sincere, well-known and popular preachers,
how has that view of God managed to infiltrate Christianity so successfully?
How has Satan, the devil, deceived the Christian world with his
misrepresentations of God's character and the way He runs His Universe?
Is it possible the Christian world has accepted and promoted
the devil's picture of God?

This book is for people who would consider
Thinking for Themselves!

Roger Setterdahl is a grain and livestock farmer living on the Illinois farm his great grandfather purchased in 1879. Born in Galesburg, Illinois in 1941,he attended college almost 3 years before joining the U.S. Army in 1966. He spent 12 months of active duty on the DMZ in Vietnam during 1967-68, in addition to the four Army posts stateside: Fort Campbell, KY; Fort Sill, OK; Fort Bragg, NC and Fort Carson, CO.

Setterdahl returned to the farm after military service and later married Carol Jean Wallace, with daughter Julie and son Lance completing their family of four. They continue to live in the same house in which his father was born.

Writing has been an enjoyable pleasure for Setterdahl, and of special interest besides farm related subjects is that of Christianity and religion. His background includes being raised in the Lutheran Church; later when married, the Methodist Church and the Seventh-day Adventist Church. Previous to the writing of this book, the Author and his family chose to discontinue church affiliation and become part of the small-group Bible study from which TAG Ministries Foundation, Inc. developed. The open, honest fellowship of this group has been the catalyst and the adhesive that has had a lasting impact on him as well as the others involved. If he may speak for the entire group:

the small-group Bible study is "Where the Rubber Meets the Road!"

Note: The net proceeds from the sale of this book will be used to enhance the efforts of TAG Ministries Foundation, Inc.