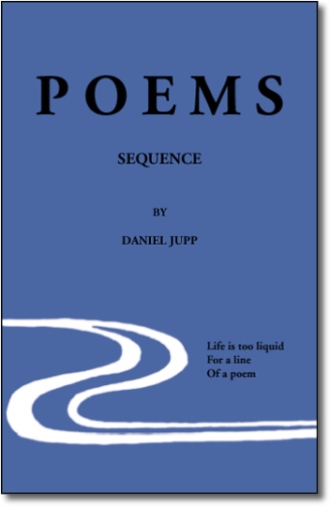 These poems are the result of spontaneous pressure from my mental and physical self: written during a full time commitment to raising a family and teaching in an American Public High School. Plans were not laid for the unity of them. These writings are sudden solidifications composed in a mental rush of thought. Behind them are ideas from years of living that have quickly become conjealed in a literary form. Though I do not consider myself a professional poet reading and writing for the purpose of earning a living, I have spent much time studying poetry. Emily Dickinson, Rainer Maria Rilke, Robinson Jeffers and Shakespeare, of course, were among those most stressed.

Dan Jupp was born in the south west tip of the golden state of California- began life in the marvelous light of the coastal lands. His parents were from diverse parts of the United States: father from a staid New England mother living in Chicago; Dan's mother a San Diegan from a San Francisco family of business and law people.

Early schooling: first year the public school in Chula Vista, California, followed by a year in the Franciscan mission of San Luis Rey; graduation from grammer school in Annapolis, Maryland.

College years: being a lover of animals, Dan began his university of California career at the agriculture branch in Davis, California. Though he found the work interesting, he decided that his mind best fitted him for a study of English language and literature.

War years: after several years as a veterinary student, Dan decided to follow the note sent by the draft board in the Spring of 1943 and join the American army.

Camp Cook on the edge of the Pacific near Santa Barbara, California was a stunning place to take Basic Training. The Army personnel did not spend much time discussing the scenery, but they did give a thorough grounding in handling weapons and to a lesser degree in army vehicles. In learning to shoot the M1 rifle with skill some hours were spent on the firing range learning to hit the bull's eye. If one missed the target completely, a red flag was raised called Maggie's drawers. Fortunately Dan never received a Maggie's Drawers.

Basic Training completed, the army put Dan and his fellow soldiers on a San Francisco bound train. Arrived at that great coastal city, the company of men bound for service in the South Pacific underwent the usual army system of hurry up and wait. After some long hours on the city docks, the soldiers and their duffle bags were on the troop ship.

Some of the men, though Dan was not one of them, thought they were simply on a test run and the ship would not actually sail to the South Pacific Islands. However it did. The favorite expression among those o nthe troop ship was "Golden Gate in '48" meaning in five years they would return to the United States. Fortunately, the war was ended in 1945.

Overseas years for Dan were spent partly in the battle zone of Guadalcanal; then in Aukland, New Zealand where he worked on supplies for the troops on the Pacific Islands to the north. Lastly in the war years, Dan was being prepared on the French island of New Caledonia for the massive invasion of the home islands of Japan. At that very time President Truman ordered the dropping of the two atomic bombs on two of our enemy cities of Japan. The war ended quickly after that horrific event.

After the war, in January 1946, Dan was honorably discharged from the service. Following his decision of several years previous, Dan transfered from Davis - the veterinarian pursuit - to the University of California at Berkeley, where he planned to earn a Bachelor's Degree in English. Graduating in 1948, he attended the University of North Carolina working toward a Master's Degree.

By 1954 Dan was married, educated and ready to earn a living. He taught in various secondary schools in different parts of the United States; courses taught were English, Yearbook, Journalism, and Creative Writing. The students published year books, the school newspaper and booklets of creative writing.