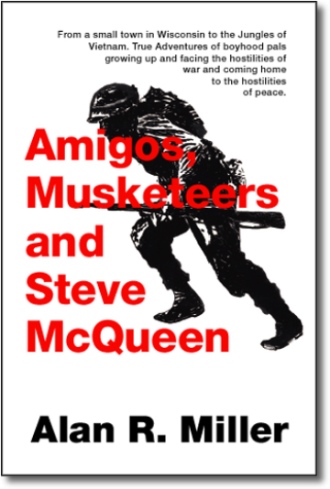 This book chronicles some adventures (or misadventures) of Alan Miller and his boyhood best friend Steve McQueen (they call themselves the Musketeers) while growing up in a small, rural Wisconsin town, before going off to join the Marines. He tells stories about the rigors of Marine Corps boot camp and fleet Marine Corps infantry training; but more important the close relationships with fellow Marines. Particularly, stories about a close knit group who call themselves the Amigos. Interwoven are stories about his continual crossing of paths with his boyhood pal Steve McQueen at home, in the Orient, and in California. He tells heart breaking narratives of the men he met while in hospitals in Vietnam, the Philippines, Japan and Okinawa.

Alan Miller describes the day to day accounts of a Marine rifleman in Vietnam. How he dealt with the stress of one day walking patrol in a hostile war zone, and three days later walking the streets of his hometown. He describes living with the nightmares of war and death, while adjusting to his life back home. How, during a 30 day raucous, homecoming party, he meets the love of his life, and asks her to be his wife.

Alan Miller was born in Milwaukee, and raised in Sussex, Wisconsin; a protypical small Midwest town. His father was a blue collar worker at Schlitz Brewery and a veteran of World War II. His maternal Grand Father was a veteran of World War I, earning a Silver Star and Purple Heart, and also worked at Schlitz Brewery. Shortly after graduation from hish school in 1963 Alan enlisted in the United States Marine Corps, and after boot camp was stationed at Camp Pendelton, California before shipping out to Vietnam in 1965. He served with the 9th Marines in Vietnam and was wounded three times. He returned from Vietnam in the summer of 1966 and was stationed at Camp Pendelton before being honorably discharged.

While working three part time jobs, evenings and weekends, he put himself through Broadcasting School. Alan worked briefly as a Public Relations man for a Florida land company before marrying his sweetheat Kathryn in 1967. (At the printing of this book Kathryn and Alan have been married 35 years). One day after their marriage, they packed up all their worldly possessions into an old Chevy coupe and moved to Carthage, Illinois, where he worked as a staff announcer for a small town radio station. A year later, in 1968 they moved back to Wisconsin, where he went to work in the advertising department at a Waukesha, Wisconsin newspaper, and their first child Alan Joseph was born. In 1974 their second son, Anthony, was born.

Over the course of the next 10 years he earned a degree in marketing, and graduated with honors, attending night school, while working full time, and raising a family.

Alan has worked for newspapers, a radio station, advertising agencies, as an advertising manager for a furniture company and a media buyer for a Wisconsin Casino.