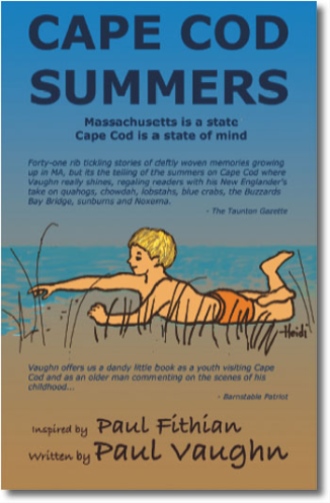 Cape Cod Summers and more as envisioned through the perceptive eyes and humorous "wild imagination" of a young boy who grew up and out of his New England childhood short pants as Paul Fithian, and into his Californian long patns as Paul Vaughn.

The poignant pictures Vaughn paints with words jog the memory of many who remember their own youth "on the Cape" during the mid-20th century. Other vignettes are unique to this last of three boys whose family traces back to, at least, the dingy beside the Mayflower.

A boy whose New England heritage was ingrained in his heart and soul enough that he often imagined his Puritan ancestors in their black, buckled hats looking over his shoulder whenever he was doing something not quite right...which was often.

It makes no difference where on the Cape these scenes take place, but only that the Cape melds mentally and physically with this youngster as he struggles to find his own self in his own world.

These Cape images create scenes of a yesteryear bringing smiles, chuckles and outright laughter to those who have also left their hearts on Cape Cod, and to those doing so at this very moment.

As the original Paul on TV's "Cheers", as an actor in film, on stage and in hundreds of commercials, as a member of Hollywood's Writer's Guild and now as an Educational Motivator and Consultant throughout the world, he weaves a story of forty-one glimpses of the Cape's past that will not come 'round again.