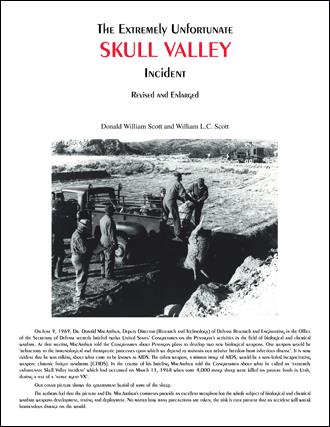 In 1973, as the Watergate scandal was becoming public knowledge, CIA Director Richard Helms ordered that major documents relating to President Nixon's 'War on Cancer' be collected and destroyed. There was something in these documents dealing with the "formulation, the development and the retention of" illegal biologicals that were used to wage war and experiment widely on Third World populations, that must be hidden from the world.

It is now evident that the "illegal biologicals" he referred to included the pathogenic agents which have led to the AIDS epidemic and other world health crisis.

In The Extremely Unfortunate Skull Valley Incident the authors trace history of the secret war against and the terrible experiments performed upon their own citizens as well as the Third World populations. But Skull Valley does more than that. In their research the father-son team discovered the links between AIDS and many other diseases now increasing dramatically worldwide. Chief among these is myalgic encephalomyelitis/fibromyalgia dismissively labelled " chronic fatigue syndrome" by the government researchers.

In addition to AIDS and ME/FM the Scotts also demonstrate the etiological links to other neurosystemic degenerative diseases such as Alzheimer's, multiple sclerosis, Parkinson's, diabetes, schizophrenia, Crohn's-colitis, etc. All are said to be "of no known cause and having no known cure". Researchers Donald and William Scott have discovered that there is a "known cause" and there may well be a cure.

The cause is a little known organism called the "mycoplasma" which has the capacity to access genetically pre-disposed cells and to destroy them by up-taking pre-formed sterols. This process is the "degeneration" which characterizes all of the diseases under study. When the cells of the endocrine system are destroyed by a sufficient concentration of mycoplasmas, the balance of the physiological balance is altered and the immune system loses its ability to defend the infected victim, and co-factors such as the human immune-deficiency virus (HIV), and those with cause pneumonia, are free to have their way, leading to full-blown AIDS.

Donald W. Scott was born in Wiarton, Canada in 1924. He served in Canada's wartime navy and later graduated from the University of Toronto (BA), Guelph University (MSc) and Laurentian University (MA). He is the President of the Common Cause Medical Research Foundation and is an Adjunct Professor of the Institute for Molecular Medicine. He edits The Journal of Degenerative Diseases and able magazine. Mr.Scott married the late Edith Goody of Cobourg in 1946 and has eight children. He is presently married to Cecile Marie Courtemanche, and resides in Sudbury, Canada.