Where is God?
Scientific Millennium Discovery of SPIRITUAL BRAIN CELLS 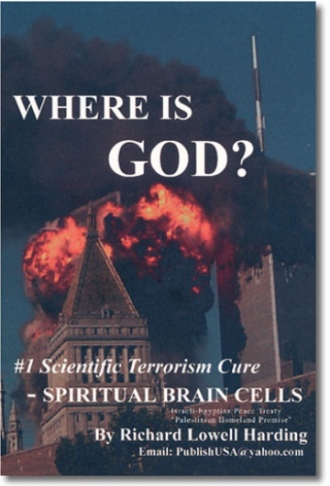 It appears God's job-prospectus is thousands of years old. Revolutionary changes are creating new questions never before asked by mankind, such as Where Is God? What does God look like? What about the newest scientific discovery of spiritual brain cells found in the frontal lobes of the forehead? What about death? etc.

Please allow me to introduce a book that has been 68 years in the writing. After my first visit to a funeral home and then experiencing an end-of-the-world scenario over the radio as a youngster, my life has been a quest for the answer to one basic question, Where Is God?

Religious fiction dominates the literary marketplace. But, God is not fiction, but fact. My journey into light has sought for real answers to settle the endless human issues of terrorism, fears, death, loneliness, anxiety and eternity.

9-11-01. A day of infamy when the world became permanently shocked, shattered and vulnerable from terrorist attacks. The old, standby answers failed. But the recently discovered spiritual brain cells came as a 21st century scientific terrorism cure for all mankind.

Please visit our web site to www.PublishUSA.net or email us at PublishUSA@yahoo.com

He is an ordained clergyman and has served churches in Boston, Attleboro and Clinton, Massachusetts. His freelance writings include Walking Through Stress, Why Does God Permit Suffering, Just What The Doctor Ordered, Back Pain Relief and the world's first Official Millennium Diary (2,867 photo's of the year 2,000).

Richard Lowell Harding during a world television interview with newly elected President Jimmy Carter at Clinton, Masaachusett's Town Hall, questioned Carter about a lasting solution for Middle East Peace. The response, heard around the globe, became the format for the Camp David Accords and the Israeli-Egyptian peace treaty.

He is married to Mary L. Harding and resides in Clinton, Massachusetts.