One Iota of the Big Picture

The relevance of the laws of nature to our lives 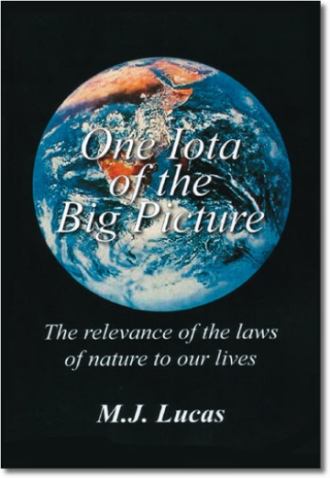 This is about philosophy or ways of thinking and food for thought.

Have you ever wondered if there is any universal code of conduct or order, that will pass the test of time,and that could make our lives easier,happier and more predictable and could reduce human suffering?Yes there is, it`s in the book.The book explains the basic structure of our surrounding including ourselves.It shows how the world we live in is connected and controlled by a very simple set of laws, including our social behavior.As a main point it explains the mental toolbox many of us have and how to use it.

Since most things we or anybody else do, start with a thought or lack of one, it pays to have a look what kind of thinking is behind our lives as well as the major world events,since they have a definite bearing on all our lives.

It`s easy to kill a thousand men (just turn on your tv and you`ll see ) but you can`t kill an idea.However, you can change ideas and with that social behavior through education,that is explaining to people why they are really making the decisions they are making and what consequences their thought patterns really have.

Right now the dominant idea worldwide is greed for power,money is just an accessory tool. This is part of an historical cycle and all the present upheavals in nature are only a connected parallel event. If anything, it shows that we as a species are subject to the cycles of nature like anything else on the planet. However, we do have the ability if we use our mental tools to minimize the destruction caused by our own social behavior. But that is not what is happening today, quite the opposite.

Today the same idea, greed for power, is manifesting itself in the most industrialized nation on earth, America, for the same reason: They can do the maximum damage. So, have we learned anything ?No, as a species we haven`t. And next time around in about 30 -40 years it will be China, the next superpower. Remember the mongols? Just imagine what they would do with even today's technology. Party time.

In my book " One Iota of the Big Picture" I point out a very simple set of laws clearly visible in nature and binding for everything including us as human species. Those laws explain amongst other things our social behavior and they also give us the chance to act differently if we so choose. chapter IV deals with the human mind and points out the mental tools at our disposal, as well as explaining the mechanism of thought patterns.chapter VI explains the biggest challenges/problems we are facing today and what is causing them. And chapter VII explains the solutions and with that the way out, using our mental tools from chapter IV.

The book is meant to be food for thought because in the end every one of us has to make up their own mind about their actions, but it certainly helps if you know what mental tools you have available to you.

I hope you enjoy the reading

have a nice day
M.J.Lucas

Chapter I. The beginning of the visible universe
Formation of structure
Basic laws of nature

Chapter V. A brief history of the evolution
of human society through ages

Chapter VI. The world we live in and
the biggest challenges

Chapter VII. The way out: Change of thinking

In 1969 the Murchison Meteorite fell in Victoria, Australia, and it contained a lot of organic compounds including amino acids. Amino acids are asymmetrical chemical structures; they can be left or right-handed. But living organisms seem to prefer one form exclusively.

Nature's insurance policy for living creatures in a dynamic system is genetic diversity. By producing a great many different models so to speak, the survival of at least enough to keep the program going is guaranteed.

But now lets have a look at the conscious part of the mind and the process of decision making, because apart from primeval behavior everything anybody ever did started with a conscious thought, a however primitive that one was or still is. The state of mind you have, determines what kind of decisions you make and how you interact with other people. Greed, envy, hatred, anger and fear are the main culprits and poisons of the mind and are learned behavior

We have a magnificent planet with a sophisticated live support system powered by the sun, crawling with life developing along evolutionary chain reactions. And now, as the Johnny's comes lately, human beings, who have a mind and a soul and can actually choose between constructive and destructive chain reactions.

If the earth is twelve hours old, the dinosaurs died out 30 minutes ago, the human species has been around for less than twenty seconds and all of human history, so to speak, took place only within the last second. That fact alone explains this, but lets take one step at a time.

So now let's have a look what the age of Pisces has stood for and why. It saw the final curtain fall on the ancient Egyptian Empire, the rise of Rome to superpower status and it's demise, the yellow tide of the Mongols overrunning large parts of the civilized world at that time,

Nature favors the survival of the species by genetic diversity. This is nature's insurance policy. Since we all have to consume food, we should be very careful about rearranging the building blocks of life in plants on a large scale.


Genetic engineering and globalization are two very powerful tools, which can be used for the good or bad and are already affecting the lives of millions of people.

Political correctness is a good example of making the wrong choice. We should be smarter than that. It really is part of the global problem, greed for control.

Widespread social decay and unhappiness are a result and marker beacon of the advanced stage of our alienation from nature, caused by the disregard of its laws and their relevance to our lives.


So what kind of world could we expect to live in if we change our scale of values? We will not be able to get rid of residual negative factors, because they are the engines of our evolution, but the extremes of the destruction we have seen in the last few thousand years are avoidable That alone is worth the effort.

If you're happy with your life the way it is, this book is probably a waste of time for you.
But if you are somebody who is looking for answers to questions and you like to expand your perspective, it's right for you.


From the origin of our universe to the structure of our societies, from ancient civilizations to the blue print of human beings, from our life support system to globalization, it explains how everything is based on the same 5 basic laws of nature and their relevance to our lives as human beings.

It provides answers to the questions why we are doing this and that, how the human mind works and where the mental mistakes are and how to get rid of hem.

As a focal point it explains a way of thinking, which is based on the laws of nature, instead of our self-made rules and because of this can lead to an attitude of live and let live and with that a happier and more balanced life.

It provokes many thoughts and touches many subjects.
No matter who you are, or what you're doing, you'll find something in it for you.

" The earth does noi need people but people need the earth "

After having a good look at the world around us and wondering if there was an obvious structure to it and a reason for many things instead of just random events , some answers popped up and the result is the book.