A Memoir of My Father's Fighting Life 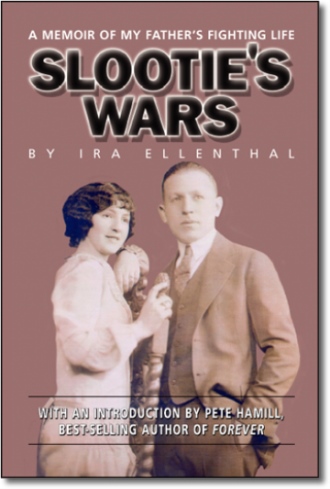 SLOOTIE'S WARS is an engaging portrait of an old-fashioned New York City street guy, a family man who waged private wars against a wide range of targets, including Jew-haters, loudmouths and troublemakers.

"Slootie's Wars is about fathers and sons, it is about a New York Ira Ellenthal makes me sorry I missed. It is about good guys and bad guys, boxing and horse racing. And a ton of heart. Ellenthal's memories of Slootie will help make memories of your own."
Mike Lupica, columnist, New York Daily News.


"Raw, vivid, touching and comic, this memoir of a father and his family and a lost New York is compulsively readable."
Harold Evans, editor and author.


"A knockout read. Powerful and meaningful. Endearing while brutally honest. Ellenthal pulls no punches in this wholly unique memoir of a father, a family, and the compelling circumstances that shaped their lives. Without a doubt, in Slootie's Wars the ultimate winner is the reader."
Howard Roughan, author of "The Up And Comer."


"Even as an old man, Slootie would have made one helluva Guardian Angel."
Curtis Sliwa, founder of the Guardian Angels and WABC-New York talk show host.


"A brave, spell-binding memoir, Slootie's Wars re-opens a window on an era of rogues, rascals and, yes, giants, who made a city and an age their own. An unforgettable, swash-buckling tale."
Brian Duffy, editor, U.S. News & World Report.


"Ira Ellenthal writes of his father with such love that you are warmed for page after page. You cannot help but love Slootie yourself as you follow him through life as it was lived by a man who was a hard-nosed New York working guy the way Patton was a general. You then hold the book in your hands and think how lucky Slootie was to have a son who could write such a tribute."
Michael Daly, columnist, New York Daily News.

A former journalist, Ira Ellenthal is executive vice president and associate publisher of the New York Daily News. Previously, he spent many years in the magazine business, serving as the top banana at The Atlantic Monthly and U.S. News & World Report. He is married, has three grown sons and seven grandchildren, and he lives in Old Greenwich, Conn.