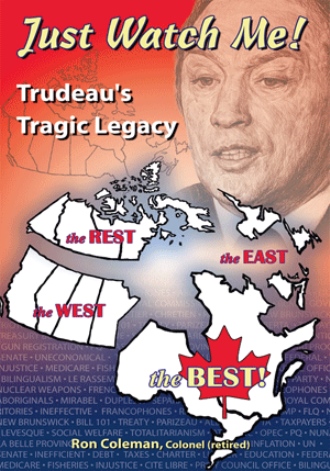 Just Watch Me, was the expression used by Trudeau when challenged by a reporter regarding his use of power during the FLQ crisis in Canada in 1970. This book traces the source of Trudeau's political groundings and his world travels after his formal education. It examines his early work in Quebec and the formation of alliances within that community.

After being convinced that he could acheive more at the federal level it explores his initial activites and policy changes as the Prime Minister. Just Watch Me demonstrates his politicalization of the federal civil service, RCMP and the military. It expores his moves to consolidate power by centralizing it, one of the key aspects of socialism. It explores his lack of principles and ethics and his revisionist thinking regarding Canadian history.

The book explores the moral makeup of politicians prevalent in Canada, and other democracies as well, and seeks to reveal their shortcomings. These character flaws eventually become embedded in the party and subvert political proccess. Trudeau altered Canadian political institutions and the bureaucracy to moribund shells and bloated francophone reservoirs respectively, filled with political hacks, party loyalists and party bag men incapable of performing their functions.

Trudeau employed reverse discrimination in order to favor one ethnic group over others. He went so far as to embed the mechanism to do so in the Charter of Rights and Freedoms. His brand of socialism transformed segments of Canadian culture from independence thus stripping them of their self-reliance and self-respect. He used his power to interfere in the economy, institute unnecessary social policies, drive down production and plunge the country into debt and deficits unknown except in wartime. He was in constant conflict with other levels of government and was incapable of developing policies and plans that were good for Canadians and Canada.

Internationally he oversaw the transformation of a middle power to a little power. His anti-Americanism and pro-communist leanings put Canada at odds with her closest ally and neighbour. Trudeau's anti-military and anti-nuclear stance resulted in the eventual neutering of the Canadian military.

In the end he squandered billions on bilingualism, the bureaucracy, the arts and Quebec. His governments were only about elevating Quebec and Quebecers to political power. In summary, he revolutionized Canada while most of Canada slumbered on.

This book exhorts Canadians to take back political power through the only tool they have left, the vote. It asks them to carefully examine their political canidates and eliminate those whose character is lacking or unlikely to withstand the assualt that the party can bring to bear. It encourages Canadians to reform their political institutions and finally to reserve the trend towards socialism; a trend that can only be destructive as evidenced in so many countries that have tried it.