The Second Reign of JFK 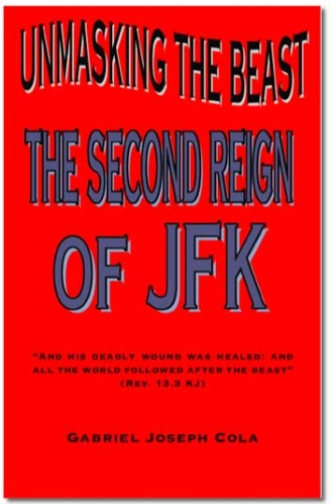 The identity of the Antichrist has been a mystery for many years until now. UNMASKING THE BEAST: THE SECOND REIGN OF JFK is an intriguing book that will attempt to corroborate that JFK is the end-time Beast of Revelations.

I know that many individuals will find my theory extremely difficult to believe. In fact, even my own wife is skeptical because, after all, JFK is dead. However, the Bible is a supernatural book and the appearance of the Antichrist will be a supernatural event.

"And I saw one of his heads as it were wounded to death; and his deadly wound was healed and all the world wondered after the beast." (Rev. 13.3 KJ)

When it happens the entire world will be shocked, including my wife.

After evaluating all of the evidence from the scriptures, along with an unbelievable chain of historical events, the correlation to JFK is unmistakable. I find it highly improbable that any individual other than JFK could be the one.

JFK IS THE ONE! HE WILL RETURN TO REIGN AGAIN!

IF YOU READ THE 'LEFT BEHIND' SERIES THIS BOOK IS A MUST READ!

Gabriel Joseph Cola is currently a Quality Assurance Coordinator in the Metallurgical industry. Gabriel earned his Associate Degree in Computer Science from Penn State, and his Undergraduate Degree in Computer Information Systems from Robert Morris University. He resides in Pittsburgh with his wife Carole, son Gabriel, and daughter Amy.