by Benjamin B. Stout 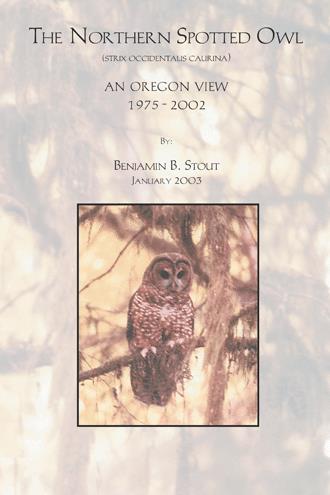 The Northern Spotted Owl - An Oregon View tells the story of a battle to save the forests in a backdrop of economic troubles in the Pacific Northwest.

"The economy in the Pacific Northwest is a disaster," says the author. In January 2003, newspapers in Portland and Salem, Oregon, featured reports on the deplorable financial situation in state and local governments. Funds for social services have been slashed as state tax revenues continue to fall below projected levels on which all budgets are based. School funding is in crisis, with drastic spending cuts in schools, colleges and universities, resulting in cutbacks and even wholesale elimination of many high quality educational programs. Unemployment is at record levels, consistently placing Oregon with the fiftieth highest level of the fifty United States. News stories suggest that greatly reduced timber harvest on national forests may be a contributing factor to the economic problems of the region.

Rightly or Wrongly, it was the Northern Spotted Owl that brought about that reduction in timber harvests.

This book is the story of the spotted owl and its role in the interplay of environmentalism, the timber industry, the economy and ultimately the quality of life in the Pacific Northwest. This volume traces the battles that were fought and the pain and anguish of affected people from the vantage point of one Oregon state representative, Representative Liz VanLeeuwen, to preserve the forests and protect the owl. The book is based on resource material from 360 different sources, including government reports, news articles, correspondence and letters to the editors, Liz VanLeeuwen used to support her political position.

Groups interested in making preservation of all forests in the Pacific Northwest their highest priority needed a means of legally preventing all or most timber harvest. They sought an issue on which to focus their legal battle. The Northern Spotted Owl ended up serving that purpose. Congress had passed the Endangered Species Act in 1973. A young biologist, Eric Forsman, had selected the Northern Spotted Owl for the subject of his graduate research, the conclusion of which was that the owl needed old growth forest for survival. Environmentalists took this conclusion and combined it with the legal power of the Endangered Species Act to stop timber harvests on federal land in the region. This book maps out just how successful the environmental campaign was in shutting down federal timber harvests-and also the devastating effect this process has had on the Pacific Northwest.

Citizens in rural communities in western Washington and Oregon and northern California warned against the consequences of reduced federal timber harvest. These communities had developed and grown economically and socially based in large measure on jobs and infrastructure generated by the harvest of timber from the federally owned national forests. State and local governments in these regions also became dependent on the payments in lieu of taxes from the federal government for these timber harvests. The size of those payments was based on the amount of timber harvested. The funds, in the tens of millions of dollars, were used to support schools and build and maintain roads. The economy of the Pacific Northwest was based on this natural resource based economy.

Citizens of these so-called timber-dependent communities understood that not only their local economies, but also those of their entire states and regions depended on the natural resource base. In fact, they understood this better than their counterparts in the region's cities and populous suburbs. While small town residents and the politicians representing them warned of the dire consequences of closing down the timber industry, residents of the more populous areas felt confidant that they were justified in closing down timber. They congratulated themselves for having successfully moved the Northwest into modern prosperity on the back of companies like Microsoft (WA), Intel and Tektronix (OR). For many years, the devastating effects of eliminating the timber-based economies were masked by what is now known as the high-tech bubble,

But when that bubble burst at the end of the 90's, it soon became apparent that the spotted owl had been used not only to shut down most federal timber harvests in the Northwest, but also to decimate the economic and social infrastructure of the Pacific Northwest. In this book, completed in January, 2003, the author attempts to trace the unfortunate developments that have led to the economic disaster that is Oregon today.

The author has been involved in forestry since before WWII and holds BSF, MF and Ph.D. degrees. He has managed a research forest (Harvard Black Rock Forest), been a University faculty member (Rutgers), a forestry school dean and experiment station director (Montana) and a program manager for a forest industry forest health program. He retired in 1991. Subsequently, he served as a volunteer natural resources staff person for Oregon Representative Liz VanLeeuwen. If pressed, he will tell you that his scientific specialty is eastern hardwood silviculture. He now lives and golfs in Albany, Oregon.