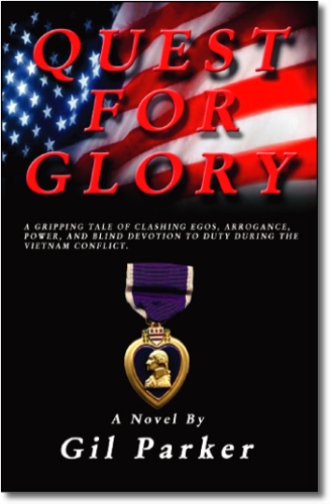 The scene for Quest for Glory is set in Southeast Asia - the Vietnam War, but it could be in numerous 'hot spots' around the world where professional-type soldiers are engaged in Special Operations. Quest for Glory offers only a faint glimmer of some of the duties and hardships endured by this special breed of men who ran and conducted long-range reconnaissance patrols during the late 1960s.

Sergeants Paul Garrett, and David Ryker, two veteran non-commissioned officers, are assigned to the US ninth Rangers for this express purpose, and wholeheartedly accept the challenge. Warrant officer Nguyen van Thanh, a veteran North Vietnamese officer of infantry troops, is responsible for training and deploying Anti-commando Unit teams to track down and eliminate all American ground reconnaissance patrols operating within the infamous A Shau valley.

After suffering numerous losses inflicted by ACU teams, Paul Garrett persuades an over-zealous commander to obtain permission from a three-star general officer to invade the ACU sanctuary located inside Laos, long recognized by everyone except the North Vietnamese. This act of committing an illegal military operation could cause untold damage to men and careers if exposed to proper authorities or news media persons.

This is minor concern to the Ninth Rangers when they finally get their chance to clash with the notorious ACU teams led by Warrant Officer Van Thanh, located inside Laos. Hundreds of men from both sides will needlessly perish because of other men's arrogance, egos, pride, and blind devotion to duty.

Quest for Glory is an action-packed novel with vivid descriptions of battlefield deaths and wounds Ñ not for the squeamish reader, nor will the reader witness favoritism shown by the Author toward any particular characters. All are treated as professionals. But the reader will experience identical feelings shown by these warriors from opposing sides when they fight Ñ just to live to fight another day. All are a 'Special Breed'.

Gil Parker is a veteran of elite US Army units, and other US governmental agencies. He is the Author of The Jump, The Execution, and Falcons Three. A graduate of Campbell University, he resides in North Carolins.