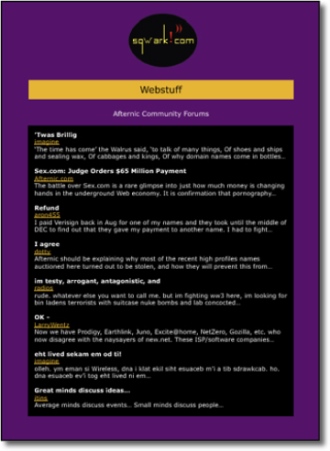 Click for enlarged copy of front and back pages/ reviews

Packed with a wealth of inside information about the internet naming system and the murky, scamming, high-rolling world of domain name trading, squatting and theft, this two volume set is also a stunningly original feast of the absurd, the deranged, the hilarious.


In this (sur)real world, you will meet Radios, the demented owner of thousands of names he has never sold, names such as toonm.com, prjnt.com, bloonds.com and see him try and take over the forum with his rabid brand of delirious meglomania. You will meet those who opposed him with their own hilarious ingeniuty, as well as Jonathan Swift, Lewis Carroll, Rudyard Kipling, and a large cast of real and imaginary characters.


A bizarre mixture of fact, opinion, information, disinformation, the inane, the insane, the inspired, the ironic, the satirical and the just plain idiotic, it is black comedy at its best, unlike anything gone before. A hoi polloi of real life speculators whose greed, madness and creativity are a world entirely unto themselves, and with the demise of the forum, never to be repeated.