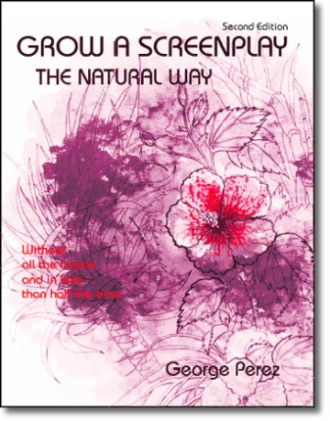 Grow A Screenplay The Natural Way does something other script writing books do not. Other books tell the reader where to put a character's name and where to set the tab stops on the typewriter or computer. They talk about heroes and heroines, plot and structure, positive and negative space. However, those books do not model a method that the majority of inexperienced writers, attempting to write their first screenplay, can successfully follow.

Grow A Screenplay The Natural Way will show you, step by step, how easy and fun it can be, with a little bit of work, to complete a motion picture screenplay-- without all the hassle and in less than half the time. With a copy of this book you will be able to stop dreaming and start writing, today!

George Perez is a stage and film actor. The plays he has appeared in include The Rivals, Rehearsal or Murder, The Man in the Bowler Hat, and Annie; his films include, Counting Days, Night or Nixes, Uniforms, Terminal Entry. He was a Drama Major at Cal State L.A. and attended the Academy of Dramatic Art in Hollywood, CA. He has written short stories, essays, plays and poems. His essay "Going Back," about his visit to Cuba in 1996, was published in the Bellingham Herald.

When George decided to write a screenplay, he picked up a couple of scrip-formatting manuals and studied them carefully. He soon realized that these books, while excellent sources for structuring and laying out a screenplay, really do very little as far as how to write a screenplay goes. So he decided to write his own book on screenwriting. Since George has worked as a Spanish Interpreter/Translator for the past ten years, he became fascinated with the thought of "translating," that is, of transforming a short story into a screenplay.

George lives in Bellingham, Washington. He is also a artist and illustrator. As a child, he would draw animals and things using the colored pencils his mother gave him. Twice he has participated in the Bellingham Chalk Art Festival and both times his work has appeared in the front page of the Bellingham Herald. He has many other ideas for screenplays and he dreams of someday seeing his stories on the big screen.