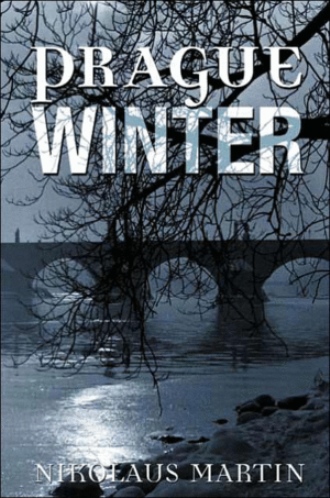 Nikolaus Martin was born in Leitmeritz, then a German speaking town on the River Elbe in Northern Bohemia, but spent his youth in Prague. His father was German, his mother Czech of partly Jewish origin. Martin was an indifferent student, except for foreign languages, preferring to spend his time with friends, visiting night clubs, playing cards and in female company. He loved the city, the old buildings, and its history. In short, his life was one of pleasant irresponsibility until the Nazis annexed his town of birth and the border region into the German Reich. Life got even more complicated when they marched into Prague and the rest of Bohemia in March 1939. He was twenty then.

Prague Winter is a memoir dealing with the life of a young man who gets caught in the cogwheels of the Prague Gestapo machine. It reads like a gripping adventure novel, except for the description of horror scenes. Martin's story explains the step by step tightening of the screw of Nazi terror. His three unsuccessful attempts to flee from Hitler's clutches end in the dreaded Small Fortress prison of Terezin.

The story begins with the trial of an SS guard, a mass murderer, whom Martin encountered during his stay in the prison.

The next chapters describe Martin's amusing activities before and at the beginning of WWII. But slowly and inexorably things change for the worse. Families of friends are first hit. One of his closest friends is deported. The father of another is killed in the Mauthausen concentration camp. The father of the third is arrested one night and executed the next day.

Martin is arrested at work. He suspects it is for his association with an underground organization, but the Gestapo releases him the same day. Some members of his organization are arrested and executed. At the same time he is called up to be sent to Germany for forced labor. He tries to flee, but is caught at the border with Switzerland and brought back to Prague to face interrogations. But he escapes from the prisoner transport and goes into hiding. In the end he is betrayed by an informer and again arrested.

Escaped prisoners are usually killed after recapture. However, he is brought back to Prague for more interrogations by the Gestapo and eventually sent to the frightful Small Fortress prison to be worked to death. He falls sick; the end is fast approaching . But then a miracle happens. He is suddenly transferred to a cushy job. Why? He doesn't know. His sister even gets permission to visit him, an unheard of privilege.

The end of war is approaching. He is spared from the last murderous excesses of the SS guards. He doesn't get infected by the raging typhus epidemic and is given a puzzling message by the second highest prison official just before the arrival of the Red Army.

Martin returns to Prague just in time to witness the excesses of the street mobs against the remaining Germans and their collaborators. He realizes with disgust that base instincts are not characteristic of only one nation.

Eventually, some months after the end of the war he discovers the background of the riddle of why he was rescued from the unmerciful fate of an individual whose future could have only been death.

Martin is unhappy with the postwar political events in the country. He fears a Communist takeover and wangles an assignment as correspondent for the press agency in which he works in order to defect. But before he can arrange it, he is recalled back to Prague just in time for the Communist putsch. He decides without delay to escape on skis over the mountains and at last reaches the West for good.

This book is not simply an autobiography. Martin, the realist with a pronounced sense of humor, dissects the history of those dark years in which he was an involuntary participant, often in the perspective of his own experience, and on occasion simply as an observer. His style is factual and dry avoiding sentimentality. It is a story of an apolitical, fun-loving person who is grabbed out of his self-made niche and almost loses his life.

Nikolaus (Claude) Martin was born in Bohemia in 1919 of a German father and Czech mother. He grew up in Prague, becoming life long friends with several of his early schoolmates. They indulged in all the distractions available to young men in Prague, neglecting their studies as much as possible, exemplifying what the world has come to know as "Bohemian." It was a good life until the Czech universities were closed by Nazi occupation at the beginning of the Second World War. Martin spent the last year of that war in a concentration camp. He was both witness and involuntary participant of that demented time.

Haunted by nightmares of being recaptured by the Gestapo or of being trapped in Prague under the Communists, he tried to put those demons to rest with the telling of his story. He may not have quelled the nightmares entirely, but he has dispassionately shown that prejudice and hatred are not the province of only one country or people.

After the war his facility in several languages land him a job as a journalist on the international desk of a Czech press agency until the Communist regime established in Czechoslovakia in 1948 threatened his freedom and compelled him to flee his country to France. He immigrated to Canada in 1950, married a Canadian, and became a citizen in 1955.

Over the years, Martin, his wife, and three children lived in many countries, and his work took him all over the world. Eventually they settled on a rural property in the south of France overlooking the Pyrenees, enjoying the pastoral life of sheep, dogs, gardens, and the fine foods and wine of France.

In 1993, there was an international commemoration of a political leader who died in the Terezin Ghetto. The President of the Czech Republic, the Austrian Chancellor, and the chair of the German Social Democratic Party in the Bundestag all spoke. Martin read from his book, PRAGUE WINTER.

After his wife of 40 years died in 1994, Martin began thinking about how and where to live out the rest of his life. In 1996, Martin,along with his two Great Pyrenean Mountain Dogs Racqel and Farah, moved back to Canada permanently and established residence in the mountains of the West Kootenays of British Columbia.