We All Wrote on the Same Outhouse Walls 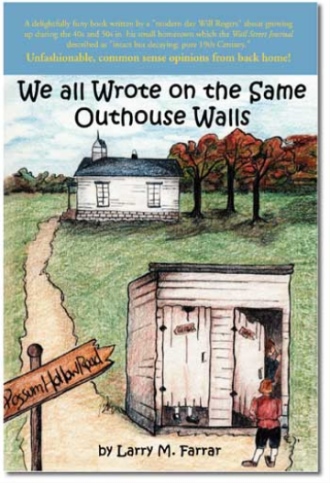 We All Wrote on the Same Outhouse Walls is a warm-hearted very humorous book about the many joys and few sorrows of growing up during the 40s and 50s in a small town exiled in the Appalachian foothills.

The book is about the author's small hometown which The Wall Street Journal described as "Intact but decaying: pure 19th Century." The Journal suggested that the town could be "On the scale of Williamsburg," but the town folks "Don't want to be preserved, saved or otherwise bothered by outsiders, no matter how good their intentions."

This priceless narrative tells about first grade in a one-room schoolhouse called Possum Hollow, a splendid misspent youth, and a homespun education which was acquired while working in a country story and hanging out in a poolroom.

The hilarious description of an endangered time and place is about colorful and unforgettable characters. It tells memorable stories and folklore which began with "I mind the time," and ended somewhat in borderline disbelief, but always in laughter. It's about nicknames, front porches, and coon dog field trials after church. And it's' about the down-home wit, sayings and opinions that made the personalities and their town so engaging.

The book also tells what the old timers, the orthopedic set, would tell you, whether asked or not, about the 60s movement, the break-up of the traditional family, the present day media, and the theory of victimization. Their opinions, today, would be unfashionable to some, but refreshingly politically inappropriate to others.

Not that the author's small hometown was perfect or blameless. The good old fashioned behavior by some of getting drunk on Saturday night and going to church on Sunday was alive and well. The town has its assortment of saints and sinners. But when it came to values and time-honored beliefs which now seem out-dated, back then small towns had them. maybe that's what one of John Steinbeck's characters in Mice and Men pointed out when the character commented, "There's nothing wrong anymore."

We All Wrote on the Same Outhouse Walls is a must read for all of you who will enjoy a nostalgic visit back to your youth or your small hometown. It will bring back happy memories of a better time and make you glad that you were there.

The book is also a must read for young readers who wonder what it was really like, and if they really were "the good old days."

Most of all the book is for those of you who just want a good laugh.

Those who know the author or have heard him speak are not surprised to hear that he has written a witty and delightfully humorous book. The fact that the narrative is about his misspent youth in his small hometown makes the book just that much better. The author has been described as a concoction between Will Rogers and Garrison Keillor.

Larry was born in 1935 and raised in West Middletown, a small town in southwestern Pennsylvania. He started school in a one-room school called Possum Hollow. During his teen years he worked in his Father's country store. Larry signed a professional baseball contract with the Pittsburgh Pirate Organization. His baseball career was cut short by the Selective Service Draft. After two years as a U.S. Paratrooper he attended Waynesburg College in Waynesburg, PA. where he graduated in 1963 with top honors in the business department. He did graduate studies at Loyola College in Baltimore, MD. He retired in 1998 from Kimberly Clark Corporation as Senior Vice President. Mr. Farrar and his wife Roberta live in Neenah, WI. They have two sons and two grandchildren.