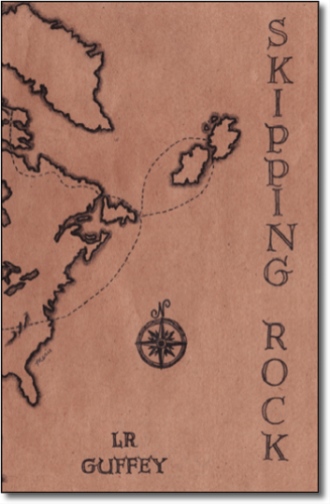 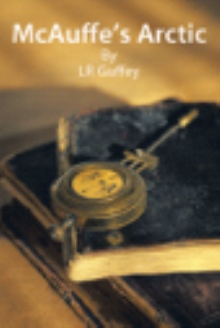 Descended from kings. Alpin the twenty eighth king of Scotland, a descendant of Colla-Uais the one hundred twenty first king of Ireland and descendants of one of the four original Milesian kings. McGuffok, McPhe, Gaffny, McAuffie, each are of the same family. Story tellers one and all, give testimony to life, liberty and faith. "Skipping Rock" begins with John and Ootah after a shipwreck off Baffin Island in the late 8th century. Survival in the harsh arctic and subsequent long flight to the Isle of Colansay off the Scottish coast follows John and Ootah, Jerimah Alex Mac Fie, his wife Colleen, as well as their son Andrew Blackmore Mac Duffie on through his heir Henry Mathew Mac Guffok, passed the stories through the years. Living as story tellers and carrying the great Claymore and old pouch, Glen Robert and Eneca were befriended by Molly. Lawrence Bruce Mac Guffok with new found wealth and determination, built a small fortune. John Robert and Maureen Mac Donald married producing twin daughters in 1576. and a son Lloyd David McAuffy in January of 1601. Lloyd married Angeline, the pig farmers daughter, after a long tumultuous relationship. In 1667 their son Paul Martin McAuffe stood at the bow of a two masted vessel bound from Glasgow to Jamestown Virginia.
Paul like the rest of his kin loved the stories and the smell of adventure. After a harrowing Atlantic crossing he awoke in the mountains of Virginia, laying in a pool of blood, memory of an explosion and the blurred vision of two half clad natives.
Rachael rivaled Paul as an expert bowman and dressed in her red blanket, defeated all others in the biggest bow shooting contest the village had ever seen.
In 1861 Sargent John M MacAuffe a Kentucky mule skinner for the Union Army was about to take part in one of his last battles. John married Mattie, both had scrapes with the law and raised a large family. Jacob Alexander MacAuffe, Jake, or Jack Ass MacAuffe to his friends, was born about 1866 0r 1867. Jake worked on a Mississippi steam boat. About 1893 Jake paid a handsome price for an indentured lass who worked on a Yankton South Dakota farm. It was found that they had a lot more in common than most folks would expect. Jake and Inga were married Christmas of 1895.
Noah MacAuffe was born the 15th of July 1900 in Nome. His mother ran a boarding house while his father worked the beaches for gold. Inga passed away in 1918. Jake just left it all and boarded a steamer for the states.
On his own, Noah sold every thing except the most prized and headed to Kaltag. He met Charlie Two Bears and his family. Dorthy, a shy girl and Noah hit it off and the two of them left Fortuna Ledge to start a life of there own. Dorthy and Noah have a son in 1935 who went on to open a flying service at age 13. Noah and Dorthy have more than one encounter with angles or spirits and are converted at their cabin above Wiseman. Noah has an encounter with a voice enticing him to write the story of his ancestors. Dorthy disappears, leaving Noah a lonely man.


Comments about the book


"Thank you" so very much for the "gift" of allowing me to read your wonderful writings of Skipping Rock. Your characters were profound individuals and the connections you made created the larger picture. I especially was inspired by the spiritualism that unfolded and surrounded the essence of your characters. I really enjoyed it. Would make a darn good movie! Keep on writing, God has endowed you with this gift!

Larry was born in Indiana during the great depression, into a clan of Scott/Irish farmers and frontiersman dating to the Americas of 1667. School was a one room affair. With the exception of the author, the teacher and all the students spoke German and had the same last name. Raised in Detroit during the war years, he joined the Air Force at age 17 to seek his adventure.
Forty four years in medicine started as an unseasoned medic at Torbay Newfoundland. Future assignments included stints in the emergency room , independent duty medic at remote Alaska radar sites, time with the National Health Service Corps, and retirement as a nationally certified physician assistant.
Interests have always included map collecting, studying arctic and sea survival, and genealogy. A professed Franciscan, the Author lives in the mountains of Northern Idaho with his wife Kathleen, two dogs, two cats, and since retirement, days filled with projects and the freedom to call his own coffee breaks.