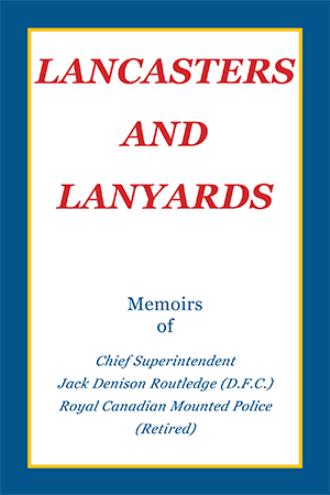 The memoirs highlight four distinct periods. A troubled childhood and problems with his father propelled him at age 16 into the Royal Canadian Air Force in 1940.

As a rear gunner following his training in Canada and England he joined a crew in Scotland and remained with them for 3 years in Bomber Command's raids on Germany and Italy and laying sea mines in the German shipping lanes. After the crew completed their first thirty trips with 49 Squadron (R.A.F.), they returned for a second tour with 405 Squadron (R.C.A.F.) of the famed Pathfinder bombing Group. Routledge spent the night of his twentieth birthday at 18,000 feet over the infamous Nuremburg where Bomber Command suffered its highest losses in one night. During the war he was decorated with the Distinguished Flying Cross.

Repatriation brought disillusionment. Failure of his business venture left him at loose ends.

His marriage to his childhood friend and enlistment in the B.C. Provincial Police and then into the Royal Canadian Mounted Police gave his post war life a purpose and contentment. After over thirty years he retired with a notable record.

He was appointed Chairman of the Driver Control Board for the Alberta Provincial Government where he served for five years and then eventual retirement after over 40 years of working.

We wish to congratulate you on the successful completion and launch of Lancasters and Lanyards. It is a fitting tribute to life lived truly and purposefully, an inspiration to read and emulate. May your book bring you new friends and tie you closer to old ones.
Love,
Shirley and Kevin Campbell

"Hi Jack, I have read Lancasters and Lanyards straight through and I admire your recollections especially of Bomber Command, Pathfinders, and the B.C. Provincial police and The R.C.M.Police. I am very pleased with your story and wish you and Margaret many happy days."
Kevin Campbell, Armstrong B.C.

"Jack Routledge's book Lancasters and Lanyards was very interesting and brought back many memories for me. Jack and I are old school chums."
John Stuart, White Rock, B.C.

" I have just finished reading Mr. Routledge's book and found it just fascinating and the descriptions so concise. I had a son in the R.C.A.F. for 34 years and can identify with so many references".
Eileen InDear, Vernon, B.C.

"I want to compliment you on a very well written and and interesting book. I thoroughly enjoyed the reading experience. I was flying Blenhiems at Number One Air Armament School at Manby, Lincolnshire, where you took your gunnery leaders course."
Don Weatherill, Coldstream B.C.

"Congratulations to Jack Routledge on the publication of his most readable book Lancasters and Lanyards. The book not only chronicles his life, it contains it contains historical data concerning R.C.A.F.achievments, statictics, and an excellent synopsis of Bomber Commands ahievements. Each year Pacific group, Air Force Association of Canada selects aviation books to donate to local secondary schools. Copies of Lancasters and Lanyards will be presented by 899 (RCAF) Wing in Vernon to Vernon Senior Secondary School and the Clarence Fulton Senior Secondary, the latter associated with the the Airport Training Council. We have invitied Jack Routledge to the presentations, and we wish him good luck with his worthy venture."

"Recently I was given a copy of your book, Lancasters and Lanyards - which I have read with the greatest interest and pleasure. I would hope this book will find its way into the public libraries, especially in the high schools. Young people today have very little if any knowledge of how their grand parents tackled the problems of their times. With my congratulations and best wishes,"
Duggan Gray
Vernon B.C.

"I received a copy of Lancasters and Lanyards in yesterday's mail. -Congratulations! I have started into it and I like what I have read. I began, where one should, at the beginning, but after a point began leafing through, probably attracted by the photos. I came upon the section where you defended the actions of Bomber Command. It is actually Appendix 3 the extract from "So Many - 50 Years On" by Bill Gunston. A great piece to include at the conclusion of an important piece of history. Best wishes to you both,"
Roland Greenbank
Huntingdon, Quebec

"I finally sat down the other night to read your memoirs and couldn't put the book down. It is a long time since that has happened. You asked if I had any comments to make please feel free to do so. Well like it or not here they are.
The wartime action narrative is realistic and sustained by substantial research material. The home life stories are intimate and provide the reader with a lucid insight into the cultivation of your character. The hardships of police life for a member and spouse become visible in a sequence of extremely interesting police experiences. In retrospect Jack, you were obviously the right man for the times. In summary, an excellent, easy flowing and captivating read for anyone.
I envy you leaving this fascinating and indelible account of your life, not only for the survivors of Bomber Command, but the Routledge family of the future. Congratulation Jack on a job well done."
Jim Barr
September 11th, 2003

Jack and Margaret retired to the Okanagan Valley where they pursued their hobbies of model railroading and Margaret as an aspiring artist. They both have other activities that keep them busy. In Jack's spare time he has an uphill and ongoing battle with cancer.